The NHS prescription charge is ‘iniquitous’ and ‘outdated’ and should be scrapped, urges the Drug and Therapeutics Bulletin (DTB)  in an editorial published in this month’s issue.

England remains the only UK country still stumping up for this additional ‘tax’ on medicines, it says.

There are a host of exemptions to payment of the charge, including age, pregnancy, and some chronic conditions, such as diabetes and epilepsy, but these exemptions also extend to unrelated conditions for qualifying groups.

“Many such exemptions appear illogical and unfair, adding to our belief that the prescription charge is a poorly conceived, manifestly unfair tax,” says DTB.

The latest figures for 2012 show that 90% of all medicines dispensed outside hospital attracted no fee, with most of them going to patients aged 60 and older, yet 80% of those aged 18 to 59 had to pay for their drugs.

The £8.05 charge per item also compares starkly with the cost of many of the commonly prescribed drugs that are now off patent, declares DTB. For example, a pack of 28 aspirin (75 mg) costs just £0.74 while a similar number of the statin drug atorvastatin (20 mg) cost just £1.26. And 28 omeprazole (20 mg) capsules for indigestion cost £1.15.

Quite apart from this disparity, there’s the cost of all the red tape required to underpin the collection and checking of exemptions and the management of pre-payment certification.

The prescription charge has long been a contentious issue, says DTB, and even contributed to the resignation of Aneurin Bevan, the architect of the NHS, in 1951.

Since then, various calls have been made for a fundamental review of the charge, including from patient organisations, the Royal Pharmaceutical Society, and the BMA.

Several alternative arrangements have been suggested, including getting the patient to pay for drugs at cost plus a reasonable dispensing fee to the pharmacist, which, incidentally is how private prescriptions can be dispensed, says DTB. 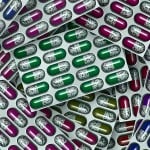 Although fees for private prescriptions vary widely, they can actually end up being cheaper than an NHS prescription.

Another anomaly is that while value added tax (VAT) is not paid on prescriptions dispensed in the community, NHS trusts have to pay the full 20% levy on medicines dispensed from a hospital pharmacy. This may contribute to “perverse prescribing decisions” which don’t serve the patient well, says DTB.

“As a cost saving measure, many hospitals discourage doctors in outpatient departments from prescribing medicines to patients sitting in front of them in their clinic. Instead they are asked to write to the patient’s GP recommending the prescription,” it points out.

This means the patient has to contact their surgery/GP to get the drugs they need before taking the prescription to a local pharmacy, which DTB describes as “clearly very inefficient and hardly patient-centred.”

It concludes: “[Prescription] charges are clearly outdated and iniquitous, and we believe it is time that politicians showed their commitment to a patient-centred NHS and abolish prescription charges in England.”