Much of Canadian artist, Deryk Houston's work over the past fifteen years has been in support of children’s rights and peace. His art installation, “Seeking Peace” is inspired by a life altering event, which helped him understand his world better.

It started with his journey to Iraq and a tour of the Ameriyha bomb shelter in Baghdad, where several hundred men, women and children died in a blinding flash of agony. The simple, concrete and reinforced steel box like building structure, with four foot or more thick walls and ceiling, was considered to be a safe place to find shelter from the constant air attacks during the first Gulf War.

As Houston walked quietly by candle light through the grim, dark interior, he said he never felt so close to evil as when he stood and studied the burnt shadows and X-ray images on the black stained walls and ceilings of that twisted space. It smelled of charcoal and pain. He was accompanied by an elderly woman who had lost her entire family in the blast. Since her loss, she has spent her time taking people through the shelter, explaining how the two, massive, guided missiles, burst through the roof and found her family inside.

On that day, she had just left the shelter, thinking that everything was safe for a while between attacks, to go back to her nearby home and hang up her laundry. (Life had to go on despite the daily bombing runs and so it was normal to come and go from the shelter.) The first missile sliced a hole in the roof and exploded inside where her family and several hundred people huddled.

A second missile entered the same hole in the roof and burst through the main floor to the next level below the first, where it exploded and created even more horrific carnage and incinerating heat. Anyone who has entered through the large, five ton doors of that place and witnessed the remains inside, leaves in shock.

But what does one do about it? How does one find any hope? Houston found it in the Iraqi people themselves. They demonstrated to him a deep eternal hope that always survives despite the darkness and it altered his ways of thinking in a profound manner over the years. It helped him retain his sanity when world events might test us to our limits.Â He also found hope from the love of his family. In his art installation; he decided not to recreate the grim physical tragedy of this event as he experienced it.

He chose a different approach which focused on life over the destruction of war, because he felt it was the only way forward.

In this installation, Deryk wants people to view the white sheets on the clothes lines and think about that woman and her family. 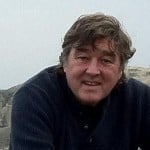 When he was in the bomb shelter he saw something completely unexpected. There was a shaft of the most, gentle, fragile light coming through the round hole in the ceiling where the missile had burst through. Inside that torn hole, mixed with the warm sunlight, were several fragile, tiny birds, flying in and out of the light. The ugliness of the twisted interior simply amplified the beautiful birds and the light.

In his art installation, Houston carefully guides people through a narrow grey passage filled with darkness and despair, disfigured dolls and twisted manikins, but then the artist gently leads the viewers to where they move between the hanging white sheets and discover a beam of beautiful light from above cascading through a hundred shards of melted soft glass. Some of the glass is imprinted with bird shapes. A projected animation also sends images of birds fluttering across the illuminated white sheets.

The exhibit is a metaphor for the Iraqi people and their future.

Single of the Week: The Black Keys – 'Lonely Boy'