The report—Progress Report on Counterparty Data [1]—concludes that while firms have made improvements in assessing counterparty risk, on the whole current practices fail to meet supervisory expectations or industry self-identified best practices. Some firms have met expectations for timeliness and frequency, data aggregation capability and data quality; however, others failed to make as much progress as anticipated. One particular area of concern remains firms’ inability to produce and submit to supervisors high-quality data on a consistent basis.

The SSG also calls on supervisors to further stress to firms the significance of reliable, timely and accurate reporting of counterparty exposure. Furthermore, firms should continue to prioritize controls and governance even in times of relatively well-functioning and stable markets. 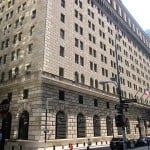 Federal Reserve Bank of New York by Beyond My Ken

The Progress Report on Counterparty Data is a result of the insight and experiences gained from SSG’s counterparty exposure data collection program known as the “Top 20” Counterparty project. Launched in late 2008 in response to the financial crisis, the project was intended to provide supervisory authorities across jurisdictions with information about large firms’ exposure to each other and to common counterparties, and enhance the ability of firms to produce quality counterparty information. In March 2013, the Top 20 project transferred to a more comprehensive program administered by a new International Data Hub at the Bank for International Settlements.

These initiatives were conducted to support the priorities of the Financial Stability Board whose mission is to address vulnerabilities affecting the financial system and to promote global financial stability.

The report is attached below, together with the transmittal letter to the chairman of the Financial Stability Board, which summarizes the report’s key observations and conclusions.