Where would BBC1 be without The Apprentice? Developing new formats for the ubiquitous Masterchef, one imagines. It was inevitable that, no sooner had Gregg Wallace vacated our screens (for, ooh, about 12 weeks probably) than Lord Sugar had arrived in his stead, a Â£250,000 investment pot in hand and a clunky monologue committed to memory.

‘I’m looking for the Marks to my Spencer; the Lennon to my McCartney,’ he said, (‘the Hale to my Pace’ having failed to make the final draft).

Still, there was something reassuringly familiar about the first week of The Apprentice and that something was the contesta . . . sorry, candidates – same hyperbole and braggadocio, same shiny suits and matching luggage. And, yes, they were organised into the same gender-specific teams they always are – a tiresome tactic which the producers persist with on the off-chance of a mass brawl breaking out.

Week One can be an unsettling place for the viewer, not unlike starting at a new workplace – all those new names to remember and personal favourites to select, then disregard and re-select. Fortunately, by luck or judgement, this year’s cast is full of recognisable characters, like Bilyana, the Bulgarian risk manager, who appeared to have wandered in off the set of the new Bond film. Then there were the familiar faces (was that Christine Bleakley with the calculator? And wasn’t that Paul Scholes prattling on about teamwork?) Best of all, though, was the recognisable name that we can exploit for cheap laughs – step forward wrestler, recruitment consultant and professional bloke, Ricky Martin. (He’s Livin’ la CV-da Loca, ladies and gents, and I’m here all week.)

We were on a well-trodden path with the task, too: brand and sell blank goods capable of being personalised to an unsuspecting public. It was the kind of task made for Simon Cowell, but also for architect Gabrielle, who led female team Sterling. Predictably, given the fate of previous series’ Alphas, there was no such clamour to lead among their male counterparts (now named Team Phoenix). An agonising game of stare-at-the-table took place until Danny Cipriani-alike Nick took responsibility, at which point the palpable relief of his colleagues appeared sufficient to have launched a zeppelin.

If the lads lacked heart, this was as nothing compared with their deficiencies in the creativity department. Teddy bears were branded with Union Jacks and handbags emblazoned with the words ‘This Is A’ above the picture of a Routemaster bus. One assumed that something had been lost in translation, frankly. 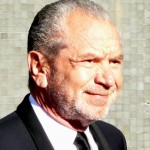 Team Sterling, more sensibly on the face of it, targeted the family market aided by some fetching animal designs sketched by Jade. Sadly for them, what they didn’t have was anyone to sell the things. Their every interaction with the general public was framed by an unsettling sense of desperation – roaming London Zoo like a pack of maned wolves and pressurising shopkeepers. One proprietor reacted to being harangued by four women with a mixture of bemusement and barely-concealed contempt that is unlikely to be repeated on British screens until Angela Merkel accepts the invitation to appear on Loose Women.

So, in spite of the fact that the cocktails-and-desserts reward had clearly been selected in the expectation of female success, Team Phoenix had their victory. Come the first reckoning, not even James Bond could save poor Bilyana from her own mouth and she was offed by Sugar (imagine Roger de Courcy in the Blofeld role), as another candidate-powered zeppelin rose over Brentwood.

What We Learned: the British public will buy any old tat; risk managers do not necessarily make the best cabbies.