‘Bitterly disappointed’: Lord Sugar’s verdict on Team Sterling’s inability to design and develop a domestic timesaving device capable of appealing to mass market retailers in two days flat was delivered as if they had made a hash of his morning egg and soldiers. It was the kind of reaction that should have been accompanied by a protruding lower lip and screaming until sick.

Which is not to say that the girls team covered themselves in glory in Week Two’s task – they didn’t. Led by Week One’s irritant-in-chief, Jane, Sterling’s efforts were an exercise in missing the point.

‘What problems are we going to solve in the bathroom?’ she said, seemingly in the mistaken belief that her team consisted of Dr Hilary Jones and the Super Mario Bros. The answer, incredibly, was either a tap cosy or an anti-splash bath screen for toddlers to combat the common complaints of chilly faucets and there being too much fun at bath time.

The boys of Team Phoenix, meanwhile, concentrated their efforts on the kitchen, with project manager Azhar refereeing the battle between Adam’s scouring marigolds (which garnered focus group support) and early front-runner Duane’s food waste compressor (which emphatically did not). With each side having its vociferous advocates and lads being lads, civil war ensued (less the Mason-Dixon line and more the Morphy Richards line), Duane’s idea eventually winning out after an embarrassing round of squabbling.

As ever in this kind of task, the pitches were crucial. And when I say crucial, I mean toe-curling. That said, the oratory of Nye Bevan would barely have been adequate to cover for such hastily-assembled end products. To put it bluntly, they were crap – the compressor resembled a giant cafetiere and the bath screen looked as though it should come with a free 18-stone copper beating it with a truncheon. Not that Jane was going to be put off from asking Amazon to part with just Â£9m to secure one million of the things. Which was rather ambitious, by anyone’s standards. Amazon were underwhelmed and bought none. 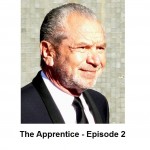 In spite of her obvious eagerness to get fired, Jane survived the bullet. This was largely thanks to Maria’s naivety (read: inability to shut up), her gift for stating the bleedin’ obvious (‘all we need to do now is get them to invest orders’) and one moment of heavy-eye lidded weakness, which was seized upon by her colleagues and a less-hirsute-than-normal Lord Sugar like scones at a fete.

What We Learned: Amazon is definitely not run by idiots.