In this season of The Apprentice, the male candidates have generally fared better. It does not follow that they are more competent than their female counterparts – however, they are certainly more competitive. Raw ambition is nothing new for this show, of course, but this group of blokes (departed Michael aside) are a peculiarly macho bunch. I’d wager that copies of Men’s Health and the entire Oasis back catalogue are staples in the homes of at least three-quarters of them.

came as little surprise, then, that several eyes lit up at the realisation that their latest challenge was to create a branded fitness class and license it to health clubs. Ricky, part time wrestler and full-time rent-a-quote, was suddenly in his element. ‘They call me The Fitness’; he began, without any hint of irony. ‘Witness The Fitness.’ (At this point, he was asking you to look at his physique, not to account under oath for his whereabouts on the night of the 22nd.)

The question was whether Ricky’s hard hours as a gym bunny would be any match for his opposite number Stephen’s professional experience in the fitness industry. There was no conclusive answer, at least in terms of innovation, with both teams opting to develop group dance classes with a twist (boom, boom). Stephen’s Team Phoenix went retro with a Day-Glo, Thriller-inspired routine named ‘Groove Train’, involving hula hoops and bright orange space hoppers. It was accompanied by a promotional video that was more camp than Glastonbury and which featured the shortest shorts since ‘I’m Alan Partridge’.

Ricky’s team, predictably, went for the jugular, basing Beat Battle! (If it didn’t come with an exclamation mark, then it really should have done) on mixed martial arts moves crossed with street dance. If that sounds a little confused, thank heaven that Laura was on hand to explain that this class was intended to work those common problem areas – no, not bums and tums . . . knees ‘n elbows. Which of us hasn’t hankered after a nicely turned elbow? 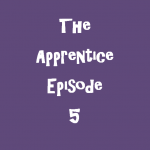 Although neither concept proved a hit with the three health clubs facing the teams’ pitches, one club had the imagination to see that Groove Train could be tailored to the family market. This was either an example of the law of unintended consequences or a win by default, depending on how charitable one felt. Either way, Ricky’s decision to put Laura and Duane in the firing line ahead of Nick, whose primary contribution was to play with his hair, proved to be more brave than foolhardy. Duane’s early exit from proceedings not only removed one of the stronger candidates, it was also the first real travesty of the series. It is unlikely to be the last.

What We Learned: Fitness is a temporary state.

Next Casualty: Nick the Haircut