If there is one thing Lord Sugar enjoys reminding the candidates of, then it is his business origins. So it was with some glee that he introduced this week’s trading task, giving the teams Â£150 with which to buy goods wholesale and flog them (I believe this is the approved terminology) to the punters (as you were) of Essex, re-investing the proceeds in the most saleable items.

The candidates seemed happy with it, too – it was a concept much easier to grasp than several of the convoluted challenges prepared earlier in the run. Also, it provided them with another opportunity to reach for the Bumper Book of Provincial Stereotypes, Team Sterling apparently having wrested this from Adam’s possession. Ploughing the majority of their budget into fake tanning solution and artificial nails may have been a shrewd concession to local tastes, but the sight of Ricky and Stephen trying to out-Pete Beale each other on the streets of Romford skirted the outer reaches of flattery. They were just an apple rubbed on a jumper and an ‘aw’right, treacle’ away from full parody.

Leading the opposing team, Jade took a risk averse approach (trans. she was unable to make a decision), spreading her team over a wider geographical area and her stock across lines with broader appeal. Providing able assistance (for once) was Adam, back in his element at Pitsea market and displaying a level of charisma he had hitherto kept hidden from view. 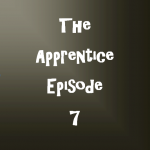 Azhar, on the other hand, assumed the role of team conscience – with the emphasis on nagging – and had but one question, like a child prodigy on a long car journey to the National Risk Championships: ‘What is the strategy, Jade?’ There was none, but this didn’t prevent her team ending the day with cash and assets of almost Â£850. Unfortunately for them, it was one of those weeks when both teams perform admirably, Sterling achieving a total of nearer Â£1000.

With Lord Sugar set on extolling the virtues of graft and business instinct over Powerpoint presentations, someone still had to go. Jade saved herself with a spirited defence of her record, leaving Azhar to shuffle away, still mumbling about strategy.

What We Learned: Sometimes it is possible to find a golden goose in a pigeonhole.