A recent report into obtaining gas via hydraulic fracturing (‘fracking’) says the practice “…does pose significant potential risks to human health and the environment.”

A report commissioned by the Co-operative and conducted by the Tyndall Centre for Climate Change Research, University of Manchester says that evidence from the US should make the UK take a ‘precautionary approach’ to development of this source of energy.

According to the report fracking brings with it a significant health risk as it causes groundwater contamination with substances some of which are carcinogenic. Then there is the amount of water required for the fracking process, which would put pressure on local water supplies.

The report also says that it is unlikely that shale gas will be a key player during the transition to a lower carbon economy.

Then there are the day to day concerns:

“Additionally, the UK is densely populated and consequently any wells associated with shale gas extraction will be relatively close to population centres. The proximity of such extraction will give rise to a range of local concerns, for example: drilling will require many months if not years of surface activity leading to potentially intrusive noise pollution; high levels of truck movements during the construction of a well-head will have a major impact on already busy roads; and the considerable land-use demands of shale gas extraction will put further pressure on already scarce land-use resources.”

The use of shale gas would also have an adverse effect on the UK’s climate change commitments says the Tyndall report. It says that just burning 20% of the identified shale gas reserves under Lancashire alone would release two billion tonnes of CO2, which is 15% of the government’s greenhouse emissions ‘carbon budget’ allowance up to 2050.

There have also been the concerns raised over the possible link between fracking and earthquakes.

And while we extract and use it there will be the danger of delays in bringing lower carbon alternatives into use the report goes on to say. 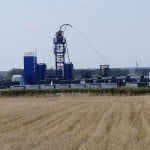 This leads Professor Kevin Anderson of the Tyndall Centre to conclude by saying:

"Consequently, if we are serious in our commitment to avoid dangerous climate change, the only safe place for shale gas remains in the ground"

"This report pulls no punches. It should be a wake-up call for those in government who have been led by the gas fracking industry towards making decisions that would otherwise lead to a miserable future. Unfortunately, I have not one grain of confidence that they will heed it.”

The Green party also says that the money required to extract, store and utilise the gas, about Â£32 billion, could pay for 2,300 offshore wind turbines and asks “should we be investing in risky quick fixes or sustainable solutions?”

“Claims the gas is clean and the process is safe have been shown time and time again to be untrue and with the process banned in France and some states in the US and moratoriums in place in Australia, South Africa against the practise, should we be considering hijacking our environmental goals and public safety for a quick fix?”

Image by Karol Karolus (Own work) [CC-BY-SA-3.0], via Wikimedia Commons

How digital SMEs are getting more NHS business