The cost of listing on the Alternative Investment Market (AIM) has fallen over the last year*, as a rush of larger IPOs raising over £100m drives down the average amount of professional fees, reveals research by UHY Hacker Young, the national accountancy group.

The total amount of professional fees paid by companies floating on the Alternative Investment Market (AIM) last year was 7.4% of all funds raised, down nearly a fifth from 9.5% in 2013. This total includes fees to nomads, legal advisers and auditors, and commission for placing shares.

UHY Hacker Young says that the fall in average listing costs has been driven in part by increasing numbers of larger value IPOs, which benefit from economies of scale in their professional fees. Over the last year, the average amount raised in IPOs soared from £14.9m to £27.8m in 2014, as the total amount raised more than doubled from £911.3m to £2.3bn last year.

UHY Hacker Young notes that investor appetite for small cap companies has been growing, which is in turn, boosting confidence and attracting more companies to list on AIM. There were 81 IPOs in 2014 compared to 76 in the previous year.

Examples of notable entrants to AIM in 2014 include Dalata Hotel Group, Medaphor, the medical equipment suppliers, and Boohoo.com, the online fashion retailer, which raised £193m, £128m and £60m respectively.

“It is important for UK PLC that the cost of listing on AIM is kept down to a sensible level.

“The market is demonstrating its ability to support larger IPOs.  There is appetite there for companies with ambitious growth plans.

“With professional fees making up a lower share of IPO proceeds, AIM is even more compelling as a fund-raising option because it combines a low cost of funds with a less restrictive listing regime.”

Examples of significant IPOs on AIM during 2015 so far include Verseon, specialising in pharmaceutical R&D, which raised £65.8m and the online gaming operator, Stride Gaming, which raised £11.2m.

UHY Hacker Young notes that the cost of listing is still higher than in 2005/06, the peak years for AIM IPOs.  Due diligence and compliance costs have increased significantly after rule changes introduced at the end 2006.

The cost of listing on AIM has fallen to just 7.4% of all funds raised as IPO activity increases 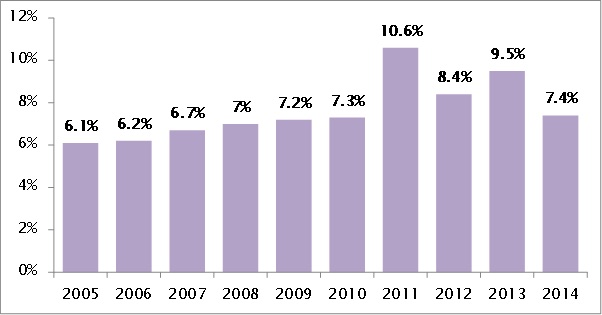