• 16 per cent growth in a year as big business asset based finance hits £5.1bn

Use of asset based finance by the UK’s biggest businesses* has grown by 16 per cent in the past year, from £4.4 billion to £5.1 billion, says the Asset Based Finance Association (ABFA), the body representing the asset based finance industry in the UK and the Republic of Ireland.

The ABFA says that asset based lending is becoming a vital conduit for big businesses to access the funding to help them make the most of the economic recovery, by expanding capacity or increasing investment in research & development.

At the end of March 2014, 315 big businesses in the UK and Ireland were using asset based finance, compared with 277 a year ago, and just 81 in 2004. The ABFA explains that this growth demonstrates asset based finance is on its way to becoming as popular as it is in the United States, where it has been accepted as a mainstream funding product for many years.

The ABFA says that this growth in asset based finance use by big businesses marks a sea change in the commercial finance market.

“We’ve entered a new era for business funding, where asset based finance is an everyday part of the commercial finance toolkit for businesses of all sizes.

“Financing tools like these have already been commonplace in the United States for a long time, and have played a key role in funding the recovery for a lot of businesses in sectors like manufacturing. We’re now seeing big British businesses following their lead, and using asset based lending as a vital part of their growth plans.

“There are a lot of UK businesses who are seeing opportunities for growth, whether through taking on large new orders, investing in their R&D programmes, or recruiting new staff. More and more of them are now borrowing against their assets to fund that expansion.

“There are general concerns about the availability of finance for businesses and the consequences this could have for the recovery.  The asset based finance market in contrast – while it has grown sharply-still has unused capacity, and providers are actively looking to grow their lending books.” 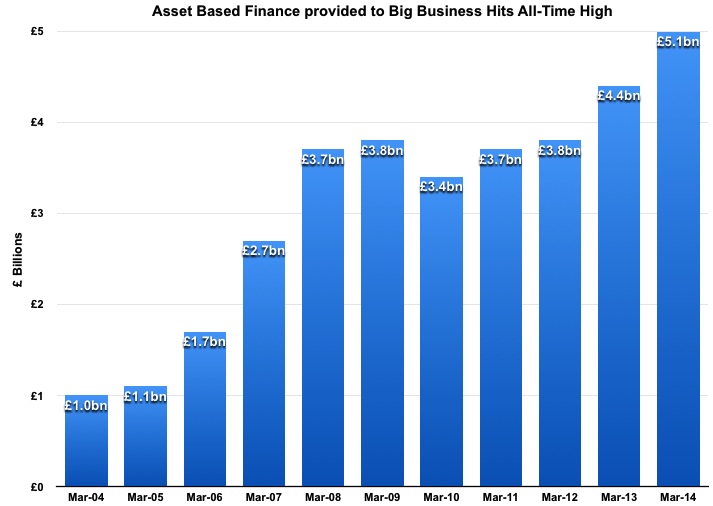 * Businesses with an annual turnover of £100 million or more