According to the British Retail Consortium (BRC)-Nielsen Shop Price Index (SPI), annual deflation stood at 0.8 percent in December, which is 0.5 percent more than November’s 0.3 percent. This is the deepest deflation rate recorded since the index started in December 2006.

Singling out food from non-food, food price inflation fell back from 2.3 percent in November to 1.7 percent in December. This is its lowest level since June 2010.

Deflation has been led by non-foods where December saw deflation at 2.3 percent compared to 2 percent in November. The SPI deflation figure in non-foods has now been deeper than 2 percent for six consecutive months.

BRC-Nielsen point out that their survey period included the much anticipated Cyber Monday, said to be the biggest day for online shopping. While the SPI doesn't measure online prices, a number of retailers ran similar promotions in-store which was a factor in the record-low deflation rate in December.

“The United States Department for Agriculture (USDA) forecasts world wheat production in 2013/2014 up 5.0 million from last month's forecast to 711.4 million tons. This is 14.1 million tons above the record wheat production of 2011/12. The largest increase to wheat production came from Canada which saw a 4.3 million ton rise to 37.5 million. Australia also reported a rise in its projected wheat outlook, up 1 million tons to 26.5 million. This is the third largest wheat production in the country's history. With no significant change expected in global wheat consumption, the increased supply of wheat is likely to provide downward pressure on prices. The current cold weather gripping many parts of US, one of the world's major wheat exporting countries, is a risk to US production and caused the price of wheat to post its greatest daily gain since October at the end of last week.” says BRC-Nielsen.

“With inflationary pressure remaining muted,” they said “shop prices are expected to remain stable in the medium term, barring any shocks to the supply chain.” 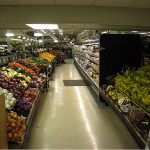 "This is the lowest inflation rate since we started compiling the index in 2006, and the eighth consecutive month of falling shop prices.  That's a double whammy of good news for cash-conscious customers, and confirms our predictions that retailers worked hard to help budgets go that bit further this Christmas.

"Non-food prices fell further in December, reflecting the widespread promotional activity as retailers competed for all-important Christmas custom.  Many categories remained deflationary, while prices fell for books, entertainment and home improvement products to attract shoppers preparing for the festive break.  It's also worth noting that 'Cyber Monday' fell in the period covered by the index, so discounting was particularly commonplace, with many retailers offering to match or beat offers found elsewhere.

"Food inflation fell to its lowest level since June 2010, driven mainly by significant easing of prices for fresh and ambient goods. With few signs of volatility in the supply chain at present, I would expect retailers to continue helping to keep the cost of living down, with prices settling at relatively low levels in the coming months."

"With food inflation slowing in December, this will have brought a festive cheer to shoppers filling their trolleys with food and drink at supermarkets, especially as Christmas fell later this year. With the continuation of price cuts and promotions across all of retailing and with many shoppers holding back on shopping to the last week, there will have been bargains and some great savings for the savvy Christmas shopper."

Financial advice: Why some people just don’t get it