The growing number of myWaitrose customers signing up to the ‘Pick Your Own Offers' scheme in a week featuring the sun drenched British Grand Prix, Wimbledon’s battling Brits and the inspirational Women’s England football team, helped deliver an encouraging performance.

Champagne sales stayed strong, Pimms sales jumped by an incredible 137%, rosé sales leapt by 43% and gin sales increased by 34%. Mixers were up 67% and we saw record breaking beer sales with bottled beer up 47%.

The hot temperatures and 4th July falling on a weekend gave many customers the perfect opportunity to feast with family and friends. Driven by strong promotional activity, Waitrose Aberdeen Angus mini beef burgers were up 136% and essential Waitrose sirloin steaks were up by 115%.

Sausage sales sizzled, up by 14%; pre-packed rolls were up 30%, cooked chicken wings saw a 56% uplift and cooked meat sharing platters were up by 28%. Barbecue sauce sales increased by a massive 60%, mayonnaise sales were up 27%, while ketchup and mustard sales were up 9% and 7% respectively. 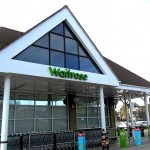 Grilled halloumi remains in high demand too as sales jumped by 56 % and summer favourites Feta and Mozzarella also had strong weeks, up 27% and 24%.

Foods more traditionally associated with picnics are seemingly more popular than ever as we saw the biggest week ever for delicatessen outside of Christmas and a record week for our Food to Go range where sales were up by almost 18%. Quiche sales were up by 29%, dip sales by 13% and olives and antipasti sales were up by 18%.

Elsewhere, the Glastonbury effect impacted on sales at our Welcome Break motorway services shops where we saw a 12% increase week on week.