Shoppers make their houses sparkle in time for Christmas entertaining

Total sales at the grocer (excluding fuel) were up year on year by 0.8 per cent last week.

This week's figures are distorted by the earlier finish this year of our high profile 'Four Festive Shops' promotion***, which this time last year was still driving additional sales in our shops.

Over 3 million customers are benefitting from promotions and rewards when they use their myWaitrose card, and nearly two thirds of all sales go through with a card. The scheme gives shoppers an extra 10 per cent off 100's of key products, making a significant difference to big Christmas spends.

People expecting guests this Christmas have clearly been sprucing up their homes ready to impress, with particular attention being paid to the finer details.

Sales of window cleaning products were up 10 per cent, with metal polishes for cutlery up 18 per cent, carpet and rug cleaner sales up 15 per cent and quilted cashmere toilet roll, up 109 per cent. To create the perfect ambience, sales of scented candles rose 23 per cent with mulled wine the festive favourite. 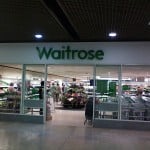 As well as spending on things to make their houses sparkle, shoppers were even more savvy with their buying choices – balancing extravagant purchases with saving money in other areas.

More than 31.4 per cent of sales were on promotion, up 1.7 per cent compared to last year, with offers on luxury items doing particularly well. For example frozen lobster, currently a third off, is proving a dinner party must-have, up 10 per cent.

Sales of Christmas plants are blooming, with poinsettias and wreaths both up 50 per cent and berried stems up 46 per cent.

Our Heston from Waitrose Box of Chocolates is in hot demand as shoppers search for one of five tickets hidden inside that grant them a day with Heston himself. It has become the top selling box of chocolates in our branches.

***Customers spending £50 four times during the qualifying period receive a £25 voucher in January. The promotion ran for six weeks until 1st December this year, and six weeks until 9th December last year.