Head to Head: Should athletes be allowed to use performance enhancing drugs?

Stories about illegal doping in sport are a regular occurrence. On bmj.com today, experts debate whether athletes should be allowed to use performance enhancing drugs.

Professor of ethics Julian Savulescu, from the University of Oxford, argues that rather than banning performance enhancing drugs we should regulate their use.

He points out that, since Ben Johnson in 1988, only 10 men have ever run under 9.8 seconds – and only two (including Usain Bolt) are currently untainted by doping. "The zero tolerance ban on doping has failed," he says. "It is time for a different approach."

He argues that regulation could improve safety and says "we should assess each substance on an individual basis" and "set enforceable, fair, and safe physiological limits."

He acknowledges that, if a substance came to dominate or corrupt performance, there would be good reason to ban it. But says, if a substance allows safer, faster recovery from training or injury, "then it does not corrupt sport or remove essential human contribution."

And he dismisses the argument that allowing elite athletes to take drugs under medical supervision will encourage children and amateurs to imitate their heroes, pointing out that amateur doping "is already happening in an unsupervised manner."

"Over time the rules of the sport have evolved," he says. "They must evolve as humans and their technology evolve and the rules begin to create more problems than they solve. It is time to rethink the absolute ban and instead to pick limits that are safe and enforceable."

But hospital doctors, Leon Creaney and Anna Vondy believe this would lead to escalating use and call for tougher enforcement.

"The argument against doping in sport is moral, not medical," they write. 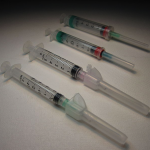 Syringes by Intropin via Wikimedia Commons

"Athletes who wanted to live a healthy existence would be pushed out altogether. Soon, the only competition that would matter would be the one to develop the most powerful drugs, and athletic opponents would enter into an exchange of ever escalating doses to stay ahead of each other."

They warn that, in some nations, "we might see a return of the state sponsored doping programmes of the 70s and 80s" and say without the anti-doping programme "the use of performance enhancing drugs would expand exponentially and filter deeper into our society."

Legitimising performance enhancing drugs in elite and professional sport would also change the message sport sends to society, they add. "Would a bioengineered athlete be able to inspire in the same way?"

They dismiss the argument that because we will never be able to catch every cheat, we should give up trying, saying the answer is "to make the anti-doping system more effective."

If testing was ubiquitous, they say, "it would be virtually impossible to evade detection, and the equilibrium would be reset in favour of not cheating."

And if a first offence led to a lifetime ban, "the risks involved would become much greater, such that fewer people would take the gamble of getting caught in the first place," they conclude.

The Tories Forget Their Past