The narrowing wage gap between the UK and emerging economies such as China, India and the Philippines will have major implications for business, according to new analysis published today by PwC (see table below).

India and the Philippines remain at the lower end of wage projection in relative terms, but average wages in India could more than quadruple over the period in real dollar terms and more than triple in the Philippines. Real wages in the UK and US are projected to rise by only around a third over the same period, remaining at similar levels to each other.

More striking is how substantially the wage gap could close by 2030. India’s current average monthly wage is around 25 times smaller than that of the UK. By 2030, the difference is likely it be only 7.5 times smaller which represents a huge relative economic shift. Average wages in US are currently 7.5 times greater than in Mexico, but the gap could close to a factor of less than 4 times by 2030. Over the same time period, the average monthly Chinese wage could rise to around half that of Spain.

“While any such projections are subject to significant uncertainties, the direction of change is clear. The large wage advantages enjoyed today by many emerging economies will shrink as their productivity levels catch up with those in advanced economies and their real exchange rates rise as a consequence.

“Places like Turkey, Poland, China and Mexico will therefore become more valuable as consumer markets, while low cost production could shift to other locations such as the Philippines. India could also gain from this shift, but only if it improves its infrastructure and female education levels and cuts red tape.” 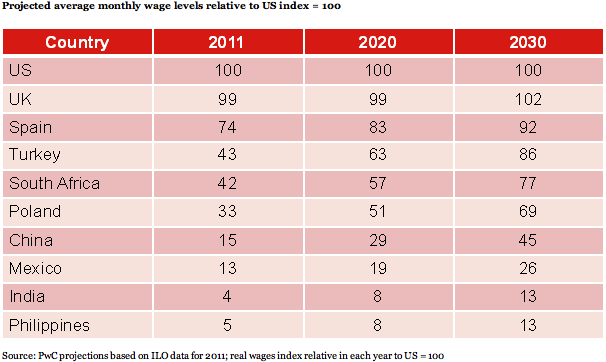 Source: PwC projections based on ILO data for 2011; real wages index relative in each year to US = 100

These trends have a number of potential implications for business strategy:

1. Companies re-shore their manufacturing or service operations, as some US companies have already started to do, or else move them to cheaper locations.

2. As current large cost advantages decline, companies move to locations that are initially more expensive but closer to home, gaining more control over supply chains to respond to customers’ changing needs and demands.

4. Current ‘Western’ offshorers (to China and India, for example) reorient their operations to sell their goods and services to increasingly affluent local populations.

Many UK companies’ offshore arrangements will not survive the changes in relative wages, but an existing base in a fast-rising market is not always something to be given up lightly. After all, these are often the locations that will see the biggest growth in consumer spending power for the coming decades.

Transforming from a UK outsource function to meet the needs of a local population will mean radical innovation, prudence and protection of intellectual property. It may also require a physical shift of senior management skills to the new ‘core’ market. Far-sighted companies are already building talent pipelines in the countries in which they may one day be headquartered.

"Change is continuous and there will be even more movement in the coming years. Companies planning for this today will find themselves with significant advantages, particularly in terms of people costs. It's inevitable that the manufacturing and services industries in countries will transform as the cost base evolves, and also that there will be winners and losers. Governments, regulators and business communities need to be ready for that shift."