Sian Berry: “It’s our job to convince the government to end this false choice debate”

The first candidate announced for the 2016 London Mayoral election will make the No New Runways event on Saturday (12 September) her first official engagement.

Sian Berry will chair a meeting of prominent environmental activists who will explain why the case for no new runways at London’s airports is quickly becoming the most attractive option [1].

Representatives from Heathrow and Gatwick’s anti-expansion campaigns will share the stage with Green activists in central London to argue for a new policy on transport that focuses on cutting emissions and building a sustainable city, rather than investing in more runways which will drive-up carbon emissions.

Camden Councillor Berry will tell delegates that no one will believe David Cameron’s Climate Change credentials if he heads to the UN Climate Change conference in November while wishing for a new runway at a London airport. 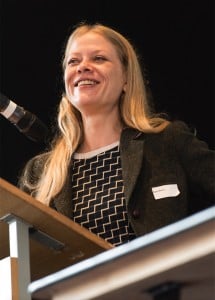 “Bigger airports make no climate sense. We cannot increase our emissions from aviation while making a fair contribution to keeping global warming within safe limits. How can the Prime Minister convince delegates at the Paris climate talks he's serious if he goes there while wanting a new runway?

“The Greens are the only party with the clear message that we need no new runways at Heathrow, Gatwick or anywhere in the UK. It’s our job to convince the government to end this false choice debate, trying to pit communities against each other over which airport to expand and who should suffer the increased pollution and noise that would result.”

Panellist Professor Alice Bows-Larkin, an expert in the conflict between aviation and climate policy in the UK will say:

“Avoiding the 2°C target with any reasonable chance requires all sectors within, and associated with, wealthy nations to make immediate and urgent cuts to their CO2 emissions. The aviation sector has very few technical options to make any more than an incremental adjustment to energy efficiency or carbon intensity in the next decade. This points towards demand management as an essential way of cutting levels of CO2 from the aviation sector in the near-term.

“Providing more airport capacity is at odds with managing demand, and although may improve efficiency in the short-term, within only a few years the increase in passenger numbers will help to uphold growth rates in the CO2 from flights to and from wealthy nations, jeopardising the goal of maintaining global temperatures below the 2°C threshold.”

“The ‘No New Runways’ event will highlight a unified position that is beginning to emerge against the building of new airport runways at Heathrow, Gatwick and across the rest of the UK.

“The event is unique because it will bring together for the first time anti-Heathrow expansion & anti-Gatwick expansion campaigners in a joint show of strength against building new runways anywhere because of the damaging implications for climate change.

“Instead of expanding our airports, the Government should introduce a frequent flyer tax which would tax aviation much more fairly and at the same time reduce the demand for expansion”.

Copper speculator grabs 80% of the market