It seems that the precious metals gold and silver are still maintaining their lustre as far as investors are concerned.

This may be why silver, normally known as 'poor man's gold', is doing so well at the moment.

As an example Arirang.co.kr reports that silver is now the most popular commodity in the Jongno Jewellery District.

The Jongno Jewellery District is the centre of the Korean jewellery scene dealing in all manner of precious gems and metals. But the doubling of the price of silver over the last year or so has seen more and more dealers buying and selling silver.

Some of the stores have now even turned themselves into specialist silver brokers. The manager of the Silver Broker Agency, Kim Sang-gi, said "The number of people coming to sell silver has tripled, maybe quadrupled. We used to buy silver for US$13.35 to $17.80 for 112.5 grams, and now we pay $89 to $107 for the same amount".

As a result many inhabitants have been searching their houses and those of parents and relatives looking for unwanted old silver spoons and chopsticks so that they can sell them on for a now tidy sum.

A look at this graph shows the reason for the interest. 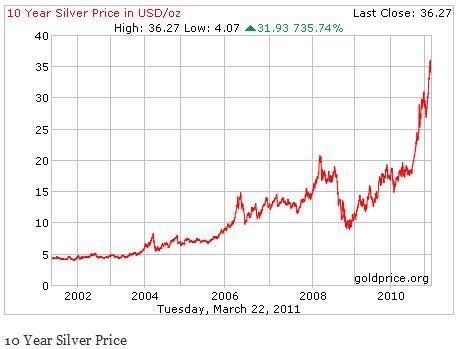 Silver dealing has also expanded into almost any place where people congregate in Korea.

A silver street trader Lee Gang-ho said "Silver prices have spiked, so many people think of selling their silver spoons in order to make some cash. Silver spoons and chopsticks were not considered that useful, but now they bring in a lot of cash".

Silver has so many more uses than decoration, spoons and chopsticks. It is used extensively in electrical appliances, film, water filters, healthcare for its antibacterial properties as well as for batteries. It also does not oxidise in air. It is therefore in great demand, a demand that some say cannot be met at the current rate of production.

Many may look at this and say a bubble has formed that must soon burst. But that ignores the fact that people are selling silver to traders, who are happy to buy more than they sell (well in Korea anyway). Just like previous gold bubbles, the time to get out is probably when the people are paying absolutely any price to get their hands on even a few grammes of the metal hoping the price will go up forever.