Silver prices are trading on the defensive despite declines in the dollar which generally make commodity prices more attractive. With the world bank cutting its long term growth prospects for global growth, precious metals such as silver are feeling the brunt of lackluster economic growth.

The decline in Silver comes despite a positive reading from the Commerce Department on Advanced Retail Sales in the US. The headline number increased by 0.6% in May to $421.2 billion. The increase in overall Retail Sales was better than the average forecast of a 0.4% during the month. Retail sales was up 4.3% in the past year, and is a strong gauge of GDP given it makes up more than 60% of overall US growth. The headline growth was driven by a 1.8% increase in auto sales. Excluding autos, retail sales increased 0.3%.

Despite the decline in silver prices, hedge funds continued to move into long postions according to the most recent commitment of traders report released by the CFTC. According to the report, managed money increased long positions by 738 contracts, and reduced short positions by 429 contracts. 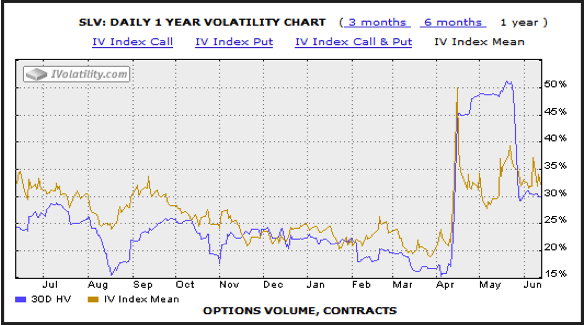 Options trading activity in the silver market has picked up substantially after the large decline in April. Implied volatility continues to remain elevated near 31%, which has increased the premiums on both call and put options. Implied volatity is the markets estimation of how much a security will move over a specific period of time on an annualized basis. 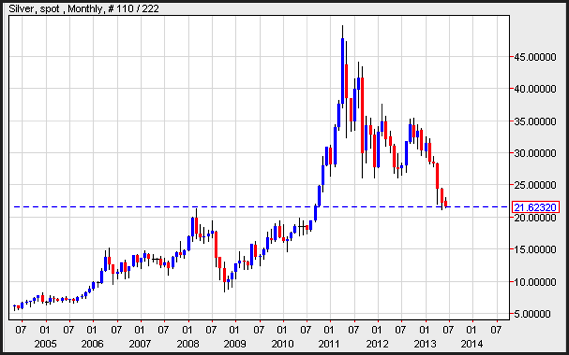 The technical picture on a monthly basis for silver prices is ominous. A close below the 20.50 level would put silver prices back into a large range between 20 and 10.