Online video streaming provider Netflix, Inc. (NASDAQ/NFLX) is currently trading at more than $300.00, well above its initial public offering (IPO) price of $15.00 and continuing to reach record highs. After trading at $994.98 on August 9, priceline.com Incorporated (NASDAQ/PCLN) is expected to become the first $1,000 stock (ex-Berkshire Hathaway). Google Inc. (NASDAQ/GOOG) is another powerful stock that recently traded in excess of $900.00, more than 10 times its IPO of $85.00.

These 10-bagger stocks have returned significant gains for shareholders, but what is it that makes an Internet stock likely to be a 10-bagger?

The first thing you will notice is that these are not the kind of fly-by-night issues we saw in the late 90s, many of which have long gone the delisting route.

Stocks that have long-term price appreciation potential have generally been the first to the game in their area of business. This is not always the case, but it’s something I see a lot.

Take Netflix, for instance. When the former bricks-and-mortar video rental company Blockbuster failed to recognize the growing importance of the Internet—especially when high-speed connections became the norm, replacing the archaic dial-up Internet service—I knew the company was dead.

At that time, back in 2002, small start-up Netflix emerged on the video scene and offered a delivery service that would allow customers to receive DVDs via the postal service. Blockbuster failed to respond. But hey, why not? The company did have those stale-looking blue and yellow stores situated across the nation and everyone seemed happy. But then with faster high-speed Internet connections, Netflix made a game-changing move and offered the ability for customers to watch movies and shows on demand via the Internet in the comfort of their homes. Blockbuster was dead. There are rivals emerging, but for now, Netflix remains the company to catch in this Internet space. (Read “Now That the Video Streaming Wars Have Begun, Who Will Win?”) 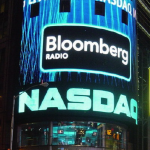 NASDAQ by Kowloonese via Wikimedia Commons

Similar situations emerged in the case of priceline.com, as it became one of the first providers of online travel services on the Internet and has since become the leader of the pack.

The reason these companies became 10-baggers was their understanding of the dynamics of the space they operated in and their ability to find innovative ways to make that space better. And this is one of the key aspects you should look for when researching a new Internet company for a long-term investment.