Single of the Week: 'Wombling Merry Christmas' – The Wombles

There was a time, I seem to recall, when Christmas was all about choices. Family or in-laws. The leg or the breast. The Great Escape or Moonraker. For the most part, there is no longer a need to divide your loyalties; no tough decision to be made. Now it's all on offer. May as well have the lot.

Except that the two competing forces in this battle aren't so very different – one being a transparent motive re-packaged annually in one, smiling format, and the other a single-minded emotion embodied in as many forms as you can imagine. And some that you can't. Singing housewives, long-dead rock stars, subterranean, pointy-nosed conservationists from South West London . . . pick up the phone and vote for your favourite NOW.

The ABC subset that to date have had most success in winning hearts and minds is the Musical Authenticity Division. This is also the most infuriating. Past endeavours have seen this group pilot Jeff Buckley's 'Hallelujah' to No. 2 (in, like, yeah, protest against a cover of a cover version, yeah?) and Rage Against The Machine's 'Killing in the Name' to top spot (other insurrectionist tunes that couldn't be played on the radio had presumably been discounted as too easy on the ear). This year sees a half-hearted attempt to get 'Smells Like Teen Spirit' to No. 1. Truly, just what Kurt would have wanted.

Then comes the Good Cause Crew, this year headed by the Military Wives Choir and the chap with the 'specs from BBC2. Not Greg Wallace. The other one. Good on them, I say. 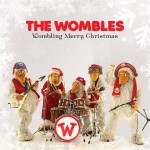 And then there's the Novelty Act Bubblegum Popsicles – a plethora of child- and Christmas Party-friendly groups continuing in the tradition of Lieutenant Pigeon and Bob T. Builder. Scoff all you want, but without novelty acts 'Love Is All Around' would still be top of the charts.

Therefore, in these days of austerity, of tightened belts and of make do and mend, there can be but one record to which The Economic Voice can lend its support with conscience fully intact; but one group with the collectivist vision and clear-sighted fiscal strategy to lead us out of the dark months and into the warm glow that can only be generated by such a jaunty little number; but one band who can be described with any degree of accuracy as being ahead of their time.

So what that 'Wombling Merry Christmas' was written by the same chap who penned 'Nine Million Bicycles'? We live in imperfect times. So what that it won't finish on top come Christmas Eve evening? It is not all about winning the battle against men with more than one haircut, you know. Some bands have common ground to keep clean.