Sir David Attenborough has launched a global crowdfunding campaign to save mountain gorillas, which is now live.

The Indiegogo crowdfund, which was launched to coincide with the first ever UK Crowdfunding Day, aims to raise £110,000 by December 11 to support Fauna & Flora International’s work with mountain gorillas. This work fosters cooperation across national borders and empowers communities to monitor, protect and benefit from maintaining a healthy population of mountain gorillas.

Sir David, who first highlighted the plight of the mountain gorillas in 1978 in the BBC’s Life on Earth television series, said: "If we are to ensure the survival of mountain gorillas, it is vital that the global community supports our efforts.

“By supporting this campaign and promoting it through your networks, you will not only be helping to secure a future for mountain gorillas, but also the tens of thousands of Rwandan, Ugandan and Congolese people who have come to depend upon them for their livelihoods and wellbeing."

On Friday, November 1 the founder of TheCrowdfundingCentre.com and organiser of the Deep Impact crowdfunding conference, Barry James, said: “The UK is leading the world in using Crowdfunding for good as well as for business. We’re delighted to be working with Sir David and Fauna & Flora International to launch what we believe is the first truly global conservation crowdfunding project – which will undoubtedly be the first of many – as part of this first UK Crowdfunding Day.

“Crowdfunding is revolutionising how businesses are created – making them more people-centred –enabling and supporting the causes the crowd are passionate about. It’s rebooting funding as we know it. 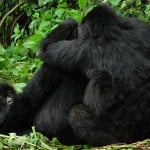 Mountain Gorillas by Carine from UK

“It’s reshaping the landscape for both for causes, charities and social enterprises and also for startups, entrepreneurs and medical research and has great potential for our communities, towns and cities across the UK. Crowdfunding has changed the financial landscape forever.”

Liz Wald, Head of International at Indiegogo, said: “We are thrilled that Indiegogo has been chosen as the platform to launch this extremely deserving campaign. Indiegogo has a broad global reach, which perfectly suits this campaign, given that Sir David Attenborough is such a world-renowned figure in conservation. We will be working closely with his team to support their outreach through media and social channels to ensure people across the globe can support this important goal of protecting mountain gorillas."