• Overall shop prices reported annual deflation for the sixth consecutive month in October, deepening to 0.5% from the 0.2% decline reported in September.

• Non-food reported annual deflation of 2.4% in October from 2.0% in September.

"After inching up slightly in September, inflation has again matched the record low we saw in July and August, marking the highest October deflation rate since our index began.

"Non-food prices fell further during the month, mainly driven by promotions on clothing and the 'Super Thursday' effect of widespread offers on the new books launched in good time for Christmas. Value was also a mainstay across the electricals category, as retailers competed to cater for strong pre-Christmas demand for gadgets and games while also paving the way for new releases still to come.

"Food inflation edged down in October, thanks to a slight fall in the prices of ambient goods, and fresh produce remained stable. This should mean good deals for shoppers as they start stocking up on seasonal fare.

"With Christmas fast approaching, there are good signs that budgets will go a little bit further for many of us this year."

"Despite the slightly more optimistic economic outlook, across the industry we are seeing that consumers are still reluctant, unwilling or, in some cases, unable to increase spend. So retailers are working hard to stimulate demand and it's of no surprise to see another slowing of shop price inflation, with further deflation in non-food. Based on current trends we also anticipate an increase in promotional spend by food retailers, which will offer cash-strapped consumers further savings ahead of December."

The BRC-Nielsen Shop Price Index reported annual deflation for the sixth consecutive month, accelerating to 0.5% in October from a 0.2% fall in September. Food inflation slowed to 2.7% while non-food deflation rose to 2.4% from 2.0% in September.

Non-food deflation is now in line with the second lowest deflation rate in the history of the series, last recorded in December 2008, when VAT fell to 15 per cent. The only time it has been lower was when the series began in December 2006. A number of categories remained in deflationary territory, including clothing and footwear, electricals and furniture and floorcoverings. For the first time in 16 months the books, stationery and home entertainment category reported annual deflation, driven by significant promotional activity in the books sub-category.

Encouragingly, food inflation fell back in October after rising for two consecutive months. The 0.2 percentage point fall was driven entirely by the ambient food category as increased discounting of non-alcoholic beverages pushed inflation lower. Alcoholic beverages also contributed to the slowing overall ambient rate. The proportion of spend on promotion is being maintained at 35 per cent as the food sector remains challenging. As the crucial Christmas trading period approaches, retailers are likely to step up the level of promotional activity to protect and grow market share, which could push food inflation lower in the short-term.

The Thomson Reuters Jefferies-CRB index, a weighted commodities benchmark, has fallen seven per cent during the twelve months to the end of our survey period (11th October) and four per cent since the end of September's survey period, suggesting inflationary pressures remain benign.

The United States Department for Agriculture (USDA) forecasts world wheat production in 2013/2014 up 3.5 million since last month's forecast to 708.9 million tons. The majority of the rise was driven by better than expected yields from Canada due to favourable weather conditions, with the latest indications suggesting 88 per cent of wheat is in excellent or good condition. In the UK, improvements have also been seen, with output projected up 0.2 million to 12.1 million tons.

The official measure of inflation, the Consumer Price Index (CPI), was unchanged in September, at 2.7%. Upward pressure was exerted by air fares although this was offset by a downward contribution from petrol and diesel prices. The core inflation measure, which strips out seasonal volatility in products such as food and energy, increased to 2.2%, the highest rate since June 2013.

The latest YouGov/Citi inflation expectations survey rose to its highest level in over two years, up 3.2% from 2.5% in September as energy bills and housing costs are set to rise further. The biggest increase on record comes after many of the major energy companies announced price rises of 10 per cent while house prices continue to rise, strengthening perceptions of an increase in the cost of living.

The minutes from the recent meeting of the Bank of England's Monetary Policy Committee hinted at interest rates rising earlier than they expected, noting that unemployment would fall further over the rest of the year and at a faster pace than at the time of the August inflation report when it released its strategy for forward guidance. The Bank also noted that the recent appreciation in sterling would lower import costs and thus push inflation down.

At -0.5% the Shop Price Index remains significantly below the official rate of inflation, the CPI. Barring any shocks to the supply chain, we expect shop prices to remain fairly stable in the medium term.

In October, food inflation slowed to 2.7% from 2.9% in September. This is in line with the three-month average and comes after two consecutive months of rising food inflation. 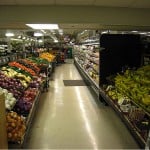 Fresh food inflation was unchanged in October from the 2.9% level reported in September. This is below the 12 month average rate of 3.2%. Downward pressure came from the milk, cheese and eggs, fruit and fish categories. This outweighed a rise in the oils and fats, vegetables, convenience food and meat categories.

Ambient food inflation slowed to 2.4% from 2.9% in September. Significant downward pressure was exerted by the non-alcoholic beverages category and to a lesser extent alcoholic beverages and the category which contains sugar, jam and chocolate. This outweighed a slight inflationary rise in the breads and cereals category.

Non-food deflation accelerated to 2.4% in October from 2.0% in September. The books, stationery and home entertainment category reported annual deflation for the first time in 16 months, falling 0.5%. The clothing and footwear and electricals categories reported an acceleration in their deflation rates while furniture and floorcoverings reported a slight slowing in its deflation rate.

In October, deflation in the clothing and footwear category accelerated to 10.7% from 8.9% in September, the highest deflation rate since the series began in December 2006. Significant downward pressure was exerted by the clothing accessories, women's and children's clothing categories which saw a sharp acceleration in their deflation rates. The footwear and men's clothing categories also reported accelerating deflation. Promotional activity was stepped up to entice consumers to spend as the warmer weather in October meant that autumn/winter collections were slow to take off.

On a month-on-month basis prices fell 1.5% in October, after a 0.3% rise in September. Prices have fallen for seven months of the year.

In October, annual deflation in the furniture and floorcoverings category slowed for the second consecutive month to 1.8% from 2.3% in September. The furniture, furnishings and carpets and household textiles sub-categories remained deflationary although the latter reported a sharp deceleration in its deflation rate. The housing market continued on an upward trend in October. The Bank of England reported that mortgage approvals rose to 66,735, the highest level since February 2008. This was supported by the Nationwide House Price Index which reported that annual house price growth rose 5.8 per cent in October. Prices still remain seven per cent below their peak in 2007.

Prices fell 0.2% in October on a month-on-month basis from a 0.6% rise in September.

Deflation in the electricals category accelerated in October to 3.8% from 3.5% in September. Downward pressure was exerted by household appliances which fell into deflationary territory while the audio and visual equipment category remained significantly down on a year ago. The latest data from GfK showed a further rise in the component that measures consumers' willingness to make major purchases, increasing to -11 from -14, 22 points higher than a year ago.

On a month-on-month basis, prices fell 0.5% after a marginal rise of 0.1% in September.

Inflation in the DIY, gardening and hardware category remained at 1.0% for the second consecutive month in October, in line with the three-month average rate. Slowing inflation in the tools and equipment for the house and garden category outweighed an inflationary rise in the glass, tableware and household utensils category. This sector has benefited from the recent improvement in the housing market as consumers look to improve their homes.

The books, stationery and home entertainment category reported annual deflation for the first time since June 2012. Prices fell 0.5% after rising 0.4% in September. The books sub-category was the main driver of the sharp deceleration in the overall index, as promotional activity was stepped up in the run up to Christmas with the launch of big celebrity releases. The home entertainment segment provided some upward pressure after reporting annual inflation in October.

On a month-on-month basis prices rose 0.2% after falling 0.1% in September.

The health and beauty category reported a marginal rise in its inflation rate, up 1.3% from 1.2% in September. Upward pressure came from the personal care category which outweighed slowing inflation in the toiletries and cosmetics category.

The other non-food category reported annual inflation of 2.2% in October from 2.3% in September.

The SPI is administered by Nielsen, who collate and analyse the data on behalf of the BRC.

The index provides an indicator of the direction of price changes in retail outlets. The BRC launched the Shop Price Index to give an accurate picture of the inflation rate of 500 of the most commonly bought high street products in stores.

As the Index is designed to reflect changes in shop prices, the sampling points chosen are five large urban areas, spread nationally. Not all sample stores are in city centres; they have been selected to reflect local shopping habits. Therefore, the sample includes superstores on out-of-town sites, town centre department stores, local parade stores, and shopping centres. In each location, Nielsen collect and process the data for the BRC, visit stores of differing types, e.g. grocery, confectionery, DIY, department stores – including small and large multiples and independents. Data collection is monthly and always in the same stores to maintain consistency.

The items for which prices are collected reflect standard consumer purchasing patterns in terms of branded/own label split and price distribution. The Index is constructed of seven main sectors of purchase: food, DIY, gardening and hardware, furniture, books, stationery and home entertainment, electrical, clothing and footwear, and other non-food. In total there are 500 items representing the seven main sectors, there are around 6,500-7,000 price points collected each period. Each product class category has an individual weighting based on the "All households" expenditure measured in the Family Expenditure Survey. This data is also used to weight the Office for National Statistics Retail Price Index (RPI).

Although it is a proxy measure of inflation, the Shop Price Index is more focused than the Retail Price Index, and demonstrates the extent to which retailers contribute to inflation through their pricing of a range of commonly bought goods.