In fact, it’s associated with overweight and obesity in pre-school children.

Switching to skimmed milk in a bid to curb excess toddler weight gain doesn’t seem to work, indicates research published online in the Archives of Disease in Childhood.

The American Academy of Pediatrics and the American Heart Association recommend that all children drink low fat or skimmed milk after the age of 2 to reduce their saturated fat intake and ward off excess weight gain.

But the evidence to back up this stance is somewhat mixed, say the authors, who wanted to find out whether milk consumption patterns among 2 year olds affected weight gain.

Researchers asked the parents/primary caregivers of almost 11,000 children about their milk consumption – skimmed, 1% semi-skimmed, 2% milk fat, full fat, or soy – when the children were 2 years old and again when they were 4.

All the children were taking part in the Early Childhood Longitudinal Study, which is tracking the long term health of a representative sample of US children born in 2001.

Additional detail was requested when the children were 4, including how much and how often they drank not only various types of milk, but also fruit juice, squash, fizzy drinks and sports drinks, so that they could calculate the fat and sugar intake from these sources. The children were also weighed and measured at both time points.

At both time points, the prevalence of overweight/obesity was high, affecting around one in three of the children (30% of 2 year olds; 32% of 4 year olds).

The average weight of children who drank 2%/full fat milk was also lower than that of kids who drank skimmed/semi-skimmed milk, even after accounting for other influential factors.

When the researchers looked at weight gain trends over time, they found no overall differences between those who drank skimmed/semi-skimmed milk and those who drank 2%/full fat milk.
This suggests that low fat milk confers no overall advantage, although it is possible that overweight kids might have gained more weight had they not drunk it, suggest the authors. 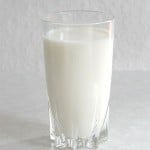 Glass of milk by Stefan KÃ¼hn

Nevertheless, those who regularly drank skimmed/semi-skimmed milk who were not overweight or obese at the age of 2 were 57% more likely to become so by the age of 4.

The authors point out that the higher prevalence of skimmed/semi-skimmed milk consumption among overweight/obese children might reflect a parental wish to trim these children’s waistlines, as logic would suggest that lower fat intake equals fewer calories.

But they suggest that perhaps the reality is more complex. Milk fat may increase a feeling of fullness so reduce the appetite for other fatty/calorie dense foods, they say.

Rather than recommending low fat milk, it may be better to stick with other weight control options for which the evidence is sound, such as cutting down on TV watching and sugary drinks, and increasing exercise and fruit and vegetable intake, they suggest.