50 years after Sean Connery first graced the screen in Dr. No, the James Bond franchise finally returns after a four year hiatus with the Sam Mendes directed ‘Skyfall’.

After much speculation concerning the direction that the latest thriller would take, this week witnesses the first glimpse of a rather rugged and perhaps suitably aged looking Daniel Craig portraying the master spy for the third time following his reinvention of the character in Casino Royale (2006) and Quantum of Solace (2008).

No doubt MGM and the team behind the enduring franchise are hoping for some seriously heavyweight and thoughtful tones with director Sam Mendes aboard ship and switching highbrow drama for what could turn out to be the most ruthless and intense Bond brought to the big screen.

The trend is continued with the addition of Ralph Fiennes adding a touch of class to MI6 alongside veteran Albert Finney and regular Judi Dench whilst Helen McCrory and Naomie Harris are the new faces of the much coveted Bond girl role.

The addition of the ever excellent Javier Bardem in the part of shadowy villian Silva will no doubt bring to mind the actor's ruthless and cold blooded performance from No Country for Old Men (2007) and have fans rubbing their hands with glee at the prospect of what deranged criminality awaits Bond.

Skyfall will open at the box office within a twelve month period that will see Bond continue to share the genre alongside the forthcoming latest instalment of the popular Bourne series and the increasingly over the top theatrics presented by the last offering of the Mission Impossible franchise.

But there is a sense that Skyfall may well be something different, alongside the classy choice of director and supporting cast, the first footage from the new movie hints at a grim and bone crunching thriller that will witness Craig's versatile spy venture into a heart of darkness and no doubt be pushed to the limit, check out the slightly traumatised word play used during what presumes to be a debriefing at the core of the film's rather cryptic trailer.

Plot details are currently sketchy but seemingly revolve around a direct attack targeted at the heart of the secret service and resulting in the seasoned agent being assigned the task of tracking down and eliminating the deadly threat.

Hopefully this is more than just the standard revenge tactic used as a plot device and Mendes is too much of an accomplished director to want to venture into the genre without bringing something new to the franchise.

Screenwriters John Logan, Neal Purvis and Robert Wade have had the task of adapting a script by Patrick Marber that will no doubt feature Bardem's mysterous Silva at its core.

A great teaser; and here's hoping that Mendes does not give away too much prior to the big release, but let us know what you think of Skyfall's first footage…..

Skyfall is released in UK cinemas on 26th October 2012. 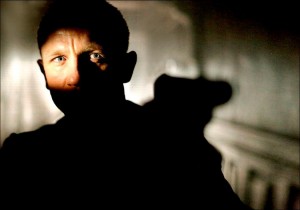 The Artist – stars of the silent screen

Making for Victory at the Museum of Science & Industry