The rate of inflation faced by households fell slightly in August 2013. The Consumer Prices Index (CPI) – the headline measure of inflation – grew by 2.7% in the year to August 2013, down from 2.8% in July.

The inflation rates from the two new measures of consumer inflation were unchanged between July and August. CPIH, the new measure which includes the costs owner occupiers' face in owning, maintaining and living in their own homes, grew by 2.5%. RPIJ, the improved variant of the Retail Prices Index (RPI) calculated using formulae that meet international standards, grew by 2.6%.

The contributions to the fall in the CPI rate came primarily from three areas; motor fuels, air transport and clothing. Petrol prices rose by 2.0 pence per litre between July and August this year but by a larger 3.5 pence between the same two months last year. Similarly air fares rose by 9.4% between July and August this year, compared with 10.2% a year ago. As usual, clothing prices rose as the autumn ranges started to enter the shops but the rises this year were less than those seen in 2012.

The most notable, partially offsetting, upward contribution came from furniture, household equipment & maintenance where prices rose for a variety of furniture items and household appliances.

These latest numbers continue the trend of broadly steady inflation seen since spring 2012. Taking a longer term view, the three main contributors to the 12-month inflation rate in the last five years have been food & non-alcoholic beverages; housing, water, electricity, gas & other fuels; and transport (including motor fuels). Combined, these three sectors have, on average, accounted for over half of the 12-month inflation rate each month.

The Retail Prices Index (not a National Statistic) grew by 3.3% in the year to August, up from 3.1% in July. 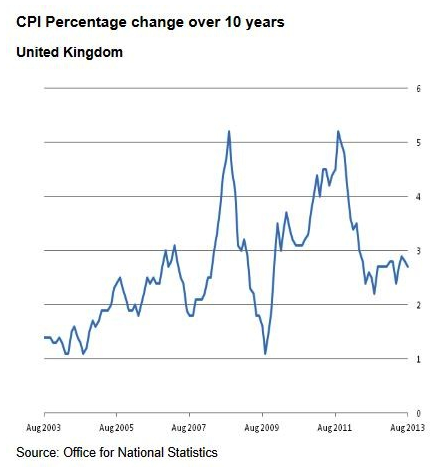 Standard Life Chairman: internal audit must provide ‘rigorous and robust challenge’ in order to reduce the chances of future crises