The Government’s new scheme to encourage the use of renewable energy technologies by householders has got off to a slow start, with The Telegraph reporting no household benefitting from the scheme even six months after its launch.

The scheme offered the chance to take out a loan with which to cover the costs when installing greener energies and insulation into a household. There is also the chance to buy new, more efficient boilers with the loan. The scheme was designed to make green energy installation more attractive to homeowners by giving them the chance to make their home energy-efficient, and thus reduce energy costs.

The loan would then be paid bay via electricity bills, with the assurance that the repayments of the loan would not exceed the forecast savings of the household.

With interest rates of around 6.96%, some argued that the cost of the loan was too high.

Currently, there is no UK household with a Green Deal plan in full fruition – this is despite the fact that the Government had plans to transform 10,000 homes with the plan this year. Four plans are pending but not yet finalised, and a further 241 households are in the process of proceeding with the financing.

It has been reported by the BBC that 38,259 Green Deal assessments have been made. Assessments are carried out before financing, in which energy improvements a household may be able to have are discussed and advice is given regarding the next move. This seems to be being rolled out in conjunction with the Governments plans to roll out smart meters seems to be a nationwide initiative to ensure that energy providers are doing everything possible to not overcharge and take precautions when it comes to energy.

How Does the Green Deal Work? 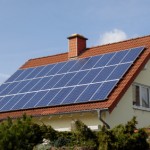 The Green Deal offers the chance to borrow money to make energy-saving improvements to a home. These can include insulation, draft-proofing, double-glazing, solar panels and heating.

In order to get the Green Deal, homeowners must first get an assessment of their property. A Green Deal provider can then be chosen to carry out the work, and the cost of the loan will be repaid in instalments through electricity bills.

Speaking to The Telegraph, Mike O’Connor of Consumer Futures pointed out: “A slow start should have been expected for the Green Deal, but it has clearly not fired consumer’s imaginations and in particular people are not convinced by the Green Deal financing model.

“Government should consider stronger and clearer incentives, such as variable council tax, to encourage more consumers to take action.”

It is hoped that the Deal will start to see more homeowners signing onto the plan as awareness is raised of the deal and the benefits of ecological energy.