Since the first discovery of the massive Jubilee oilfield in Ghana by a start-up company, the West African playing field has begun to change, and so too have investor sentiments, disappointed most recently by the low fourth-quarter 2013 results of major integrated oil companies like Exxon, Shell, Chevron and BP.

But while the supermajors are struggling with soaring project costs and poor balance sheets, innovative juniors and start-ups are increasingly swooping in to take advantage of new highly prospective plays–and as long as they don't come up dry they are turning into superstars overnight.

West Africa's emerging hotspot of Ghana is one of the best indicators of how the oil and gas playing field is undergoing a major transformation.

In 2007, a Dallas-based start-up company, Kosmos Energy LLC, jumped on this scene to great fanfare, making the Jubilee field discovery. It was the company's first major discovery, and one of the largest discoveries in all of West Africa in two decades. First production came online in 2010 and average production today is about 104,000-110,000 bpd.

A record-breaking inflow of offshore oil investment followed this discovery, bringing in British operator Tullow Oil, which remains the key player in Jubilee, and a whole list of major oil and gas companies eyeing not only Ghana's Jubilee field, but everything in the West African vicinity.

But at the end of the day, it was a small Dallas-based start-up that prompted the unparalleled development of oil and gas plays in West Africa.

Another start-up, the African-based subsidiary of CSE-listed Gondwana Oil, is continuing the trend in Ghana. Earlier this week, the company won exclusive rights to negotiate for the offshore Cape Three Points South Block in the highly prospective Tano Basin, about 30 kilometers from Jubilee. 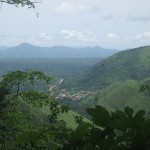 This particular block hopes to take off where Kosmos left off with Jubilee. The block is surrounded by 20 producing discoveries in an area that has a commercial success rate for drilling of over 60%.

Gondwana is in a similar position to Kosmos when it made the Jubilee discovery.

So while there is some safety in the diversification of the major oil companies, it's also harder for investors to get big returns on a hot new play like Ghana. As such, investors are increasingly willing to risk on juniors and start-ups who are focused on a single hotspot that promises a big reward. If these low-market-cap companies can actually get their hands on significant acreage in venues like Ghana, investors seem ready to take notice.

In the meantime, the bigger companies continue to make significant headway in with Ghana's oil, despite a few setbacks [1], including delays to the country's gas infrastructure, which means that associated gas is being lost to flaring or has to be re-injected into wells.

Italian oil giant Eni has been successful in the Tano Basin, not far from Jubilee, estimating that field holds around 150 million barrels of recoverable oil. Hess Corporation [2] is also prioritizing Ghana, with seven successful wells so far in the Tano Basin and new exploration planned for this year.

By. James Burgess of Oilprice.com