Many green solar power panel projects have been cancelled because of the government’s decision to cut the feed in tariff that energy providers pay to those that generate their own power.

But not only has the government surprised the industry by deciding to halve the feed in tariff (FIT) rate, it has also brought forward the plan to December the 12th instead of the end of the financial year in March.

The feed in tariff (FIT) had made it economically feasible for those with the money to invest in solar power panels and achieve a 6% to 8% p.a. return on their investment by saving on their electricity bills as well as receiving the FIT for the following 25 years.

But it also made it possible for those who could not previously afford to have the fitted to ‘rent’ out their roofs. The company fitting the panels gets the FIT and the homeowner gets the free electricity.

But the FIT had been calculated using the cost of the panels and now that the cost has vastly reduced the return being made was, according to the energy secretary, Chris Huhne, ‘frankly luscious’.

This has caused many councils, who were planning to put these on the roofs of low earners, to cancel their plans. This could cost them a lot of money, maybe hundreds of millions.

This has obviously had the further devastating effect on the many companies that were growing in response to the demand that the FIT generated. Many ‘green jobs’ will now go as a result.

But it does not end there. There are also for example call centre jobs that may well go as well as those in advertising.

And those jobs contracted for or already started will have to be finished on time to qualify for the FIT. Those already fitted will continue to qualify as promised. 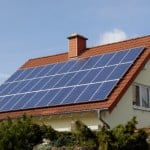 There is also the question of the government’s need to meet the carbon reduction requirements it has signed up to. A large section of this depended on a certain number of households taking up the opportunity that the FIT offered.

Or maybe the economic situation is so bad that our carbon emissions will fall because businesses and homes can’t now afford the energy.

The government is now coming under pressure from the industry and local government to at least delay the reduction in the FIT until the end of the financial year.