It seems that our new military recruits are taking a leaf out of the books of their betters by embarking on some entrepreneurial schemes of their own.

The Sunday Express reports that soldiers are so poor that they are stealing metal from their barracks.

“More than Â£500,000 of copper, brass, steel and lead has been stolen from Ministry of Defence bases in just two years” says the Express.

According to one serviceman the MoD police make stringent checks of all vehicles coming onto bases for the obvious security reasons but don’t check those exiting, so leaving a wide open door for those carrying contraband.

The blame is being laid at the door of an erosion in real terms of wages and the introduction of the pay as you eat system as well as the actions of callow youths who do not realise that this does not fit in with the army ethos.

And the Express quotes Conservative MP Andrew Percy as saying that “It’s unfortunate that they find themselves in this position, but the fact is the law is the law and this is just unacceptable.”

So what’s going on? We recruit a bunch of youngsters who we teach to kill with their bare hands as well as how to shoot with the weapons we equip them with. Then we send them off to foreign lands and entrust the lives of others in their hands. Then, when they do kill on our behalf, they are as likely to end up being the subject of an enquiry as they are of being praised. We don’t pay them much and we expect them to somehow be better than the rest of us and ‘punch above their weight’ on the world stage. The US army also call our boys ‘the borrowers’ 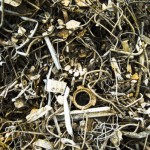 Then, while they and their families are living in sub standard accommodation, bankers are still commanding vast salaries and politicians are still so far out of touch that they still want their expenses to go unchecked.

Maybe those servicemen involved, who are very probably a minority, are just learning from all those clever people out there to take the main chance while the metals prices are buoyant.

But most tellingly, look at the amounts of money involved here compared to the billions and trillions lost during the recent financial crisis and ask yourself just who the biggest bunch of crooks is.