Investors in Prime Central London (PCL) have reason to be positive this year as weekly rents have begun to creep upwards once again. This comes after a prolonged period of stagnation following the downward correction of rents which reflected the fall in landlords’ running costs as they enjoyed rock bottom interest rates.

“The key dynamic in this marketplace remains ‘location over size’”, explains Naomi Heaton, CEO of London Central Portfolio (LCP). “The squeeze on rents during the Credit Crunch as corporates underwent stringent belt tightening has not relaxed, meaning that smaller properties remain the most popular amongst corporate tenants who are attracted to the ‘bright lights’. The huge influx of international students, often living on their own, adds to this demand. Around 80% of properties rented in PCL are 1 or 2 bedroom units.”

According to LCP’s bi-annual lettings audit, one bedroom apartments in PCL remain the most attractive to tenants with the average turnaround time between tenancies decreasing to just 16 days, compared with 24 days for 2 bedroom properties. For all properties, void periods have fallen to an average of 20 days, representing a 13% decrease from 2013-14.

As expected, the most internationally favoured areas have come out on top again in terms of highest weekly rents. Landlords in South Kensington, a favourite of French tenants fleeing the homeland’s penal tax regime, have the most reason to celebrate. Now receiving over £100 a day in rent for the smallest flats, the area is clocking up an average of £747 a week, more than the average salary in the UK.

Last year’s most expensive area, Monopoly’s famed Mayfair, however, saw the largest fall (14.8% to £678 a week) losing its first place to South Kensington. The largest rental increase this year was 19.4% in Knightsbridge, with properties achieving rents of £732 on average. New lets across PCL, have seen rents edge up 4.2% over the last year to reach an average of £602 a week.

The most affordable areas to rent in PCL remain North and South East of Hyde Park, with Bayswater & Paddington demanding the lowest average weekly rent of £538 a week. Pimlico which has lagged behind in recent years, surged ahead with rental increases of nearly 9% to £560. For those keen to rent in PCL and on the lookout for a good deal, one bedroom properties in Marylebone & Fitzrovia are renting for £429 a week on average, whilst two bedrooms in Pimlico are going for £641 on average.

“As the centre of gravity in PCL moves to the less traditional areas benefiting from good transport links and architectural heritage, the rapid increases in sales values have not been reflected in rents. As gentrification continues, rents are now playing catch-up. The smart buy-to-let investor will look away from PCL’s better known locations to central areas where there is still room for both prices and rents to go up” Heaton adds. 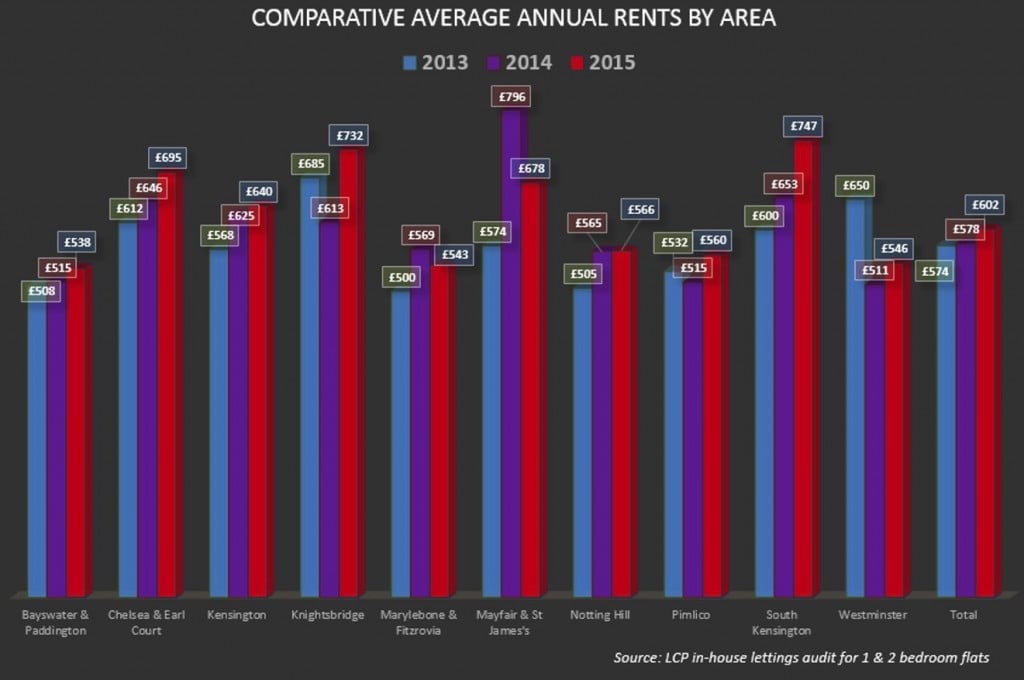 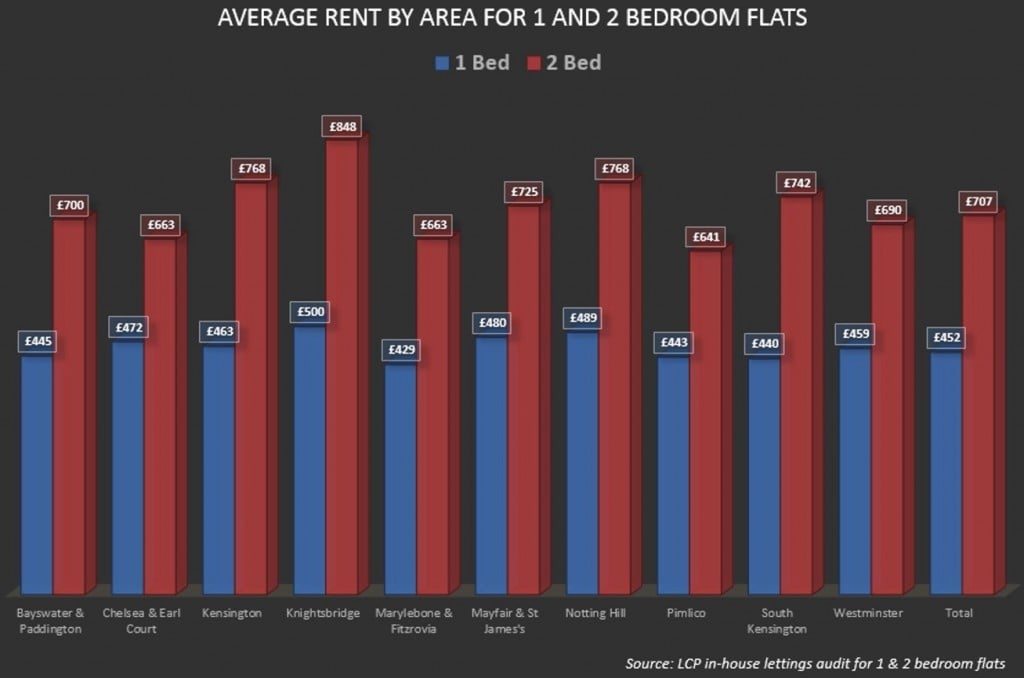 Older stock has enjoyed a small rise in rent of 1.3% this year as the general rental market strengthens. However, LCP’s research highlights the fact that properties which are brand newly refurbished have seen the most marked increases, particularly the “worker bee” one bedroom flats which have enjoyed a 5% rise.

Heaton concludes: “There has been a paradigm shift amongst tenants who increasingly demand immaculately presented flats and service on tap. Landlords need to realise that tenants are looking for a complete ‘lifestyle experience’ if they are to maximise yields and minimise voids.”