The next generation of four new Royal Fleet Auxilliary tankers are to be ordered by the MOD and built in South Korea by Daewoo.

Although some British companies took part in bidding for the contract none of them submitted a final bid.

Daewoo Shipbuilding and Marine Engineering (DSME) is now the preferred bidder to build the four 200 metre long 37,000 tonne ‘MARS’ vessels at a cost of Â£452 million.

The vessels are also versatile enough to simultaneously refuel an aircraft carrier and a destroyer whilst resupplying other vessels via helicopter said Chief of Defence Material Bernard Gray.

Although foreign built the project will utilise the UK Bath based BMT Defence Services ‘AEGIR’Â® vessel design. Â£150 million will be spent in the UK on associated contracts that assist the project.

Peter Luff, Minister for Defence Equipment, Support and Technology, said: "Over the next decade, the government will be investing billions of pounds in our maritime capabilities to ensure that our Royal Navy remains a formidable fighting force. This project will inject up to Â£150m into UK industry and support and maintenance will also be carried out in the UK. The government remains committed to building complex warships in UK shipyards."

Sang-Tae Nam, President and CEO of DSME said “DSME is especially proud to have won this important contract from the UK MOD, it shows a level of confidence in our ability to build ships to time, cost and performance. This significant 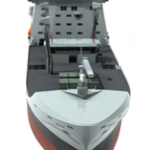 win in the UK, coupled with our recent Indonesian submarine order, helps to further broaden our international business credentials. Exporting these MARS Tankers to the UK adds to our already strong and competitive portfolio, and we have no doubt that the great and longstanding relationship between DSME and BMT will be strengthened by this success.”

Managing Director of BMT Defence Services, Muir Macdonald, said “We, and our partners DSME, are delighted with this result against such strong international competition and are looking forward to reinforcing our partnership with this joint success. I know we shall very much enjoy working closely with the MOD to now deliver these ships that are such an important addition to the RFA fleet. It will be a privilege to work with a shipbuilder with the reputation and capabilities of DSME; it gives BMT a massive boost in further proving our design and engineering expertise. The global market for auxiliary vessels will remain strong over the next couple of decades and the selection of our AEGIRÂ® design puts Britain in pole-position for championing our design and know-how around the world.”