Despite recent days’ market volatility, investors who put £10,000 into the US stock market over the past year would have netted a modest gain of £500.

Yet, despite its underperformance, TD Direct Investing suggests that investors shouldn’t overlook the FTSE 100, which is likely to rebound. Michelle McGrade, chief investment officer at TD Direct Investing, said: “The freefalling FTSE is being pulled down by the big international commodity names, creating concern amongst UK investors. But, on the flipside this is also revealing an opportunity to invest in high-value UK domestic-facing stocks.”

The FTSE 100 is one of the biggest international indices in the world, and is an idolised index where stocks generate a greater share of revenues from overseas compared to the US market.

But the UK’s stock market is being pulled down by its links to emerging markets, where growth is slowing and demand for London-listed commodities is falling. Losses on commodity stocks such as Glencore, Rio Tinto and BP are weighing heavily on the FTSE’s performance, especially by comparison to the US where commodity stocks comprise much less of the S&P 500 index which is dominated by high-flying tech stocks.

As a result, the FTSE 100 is languishing behind the S&P and the difference in returns over the past five years are sizeable, as the table below shows.

The table shows that £10,000 invested in the FTSE 100 index generated a positive return over three and five years, but the US market has outperformed the UK each time, underlining America’s more profitable market in recent years.

Why has the FTSE lagged behind the S&P?

The UK’s underperformance against the US is attributable to two features of the FTSE’s make-up: its sector and style.

The grouping of stocks into sectors has a huge bearing on the performance of stock markets. High-flying tech stocks comprise nearly 20% of the S&P 500 index compared to just 1% in the FTSE 100. America’s index is filled with tech giants such as Apple and Google that have propelled the S&P’s rise, both stocks having trebled in the last five years. By contrast, few investors would have heard of ARM Holdings, the FTSE 100’s most famous tech stock.

Britain is being weighed down by resources stocks

The FTSE’s lack of tech is offset by a 20% counterweight in resources stocks, twice the figure assigned to the US benchmark. Unfortunately, these energy and materials sectors have suffered from falling commodity prices. Mining stocks Anglo American and Randgold

Resources have weighed particularly heavy on returns, counting double-digit losses and pulling down returns in an otherwise upward trending five years for the FTSE.

FTSE is full of value stocks such as HSBC, Vodafone, Tesco

Akin to fashion, there are styles of investing for the market too which can help or hinder performance depending on the stage of the market cycle. Style investing takes two forms: value or growth. Value stocks trade cheaply relative to their book value, but can offer substantial upside when stock markets are nervous and when the company’s prospects improve.

Growth stocks exhibit higher sales revenues than value stocks but are more expensive to buy. Starbucks and Facebook are two companies with strong sales figures but expensive share prices in the S&P 500.

Growth investing is the current fashion

Value and growth stocks go through peak and trough cycles, for example, the graph attached below shows value (blue) outperforming growth (green) in the early noughties but then growth retaking the lead following the credit crunch low in 2009. The recent good run for growth-style investing benefits the S&P 500 index more than the FTSE as the US index comprises more growth stocks such as the aforementioned Starbucks and Facebook in addition to Google, Apple, Walt Disney and Nike. 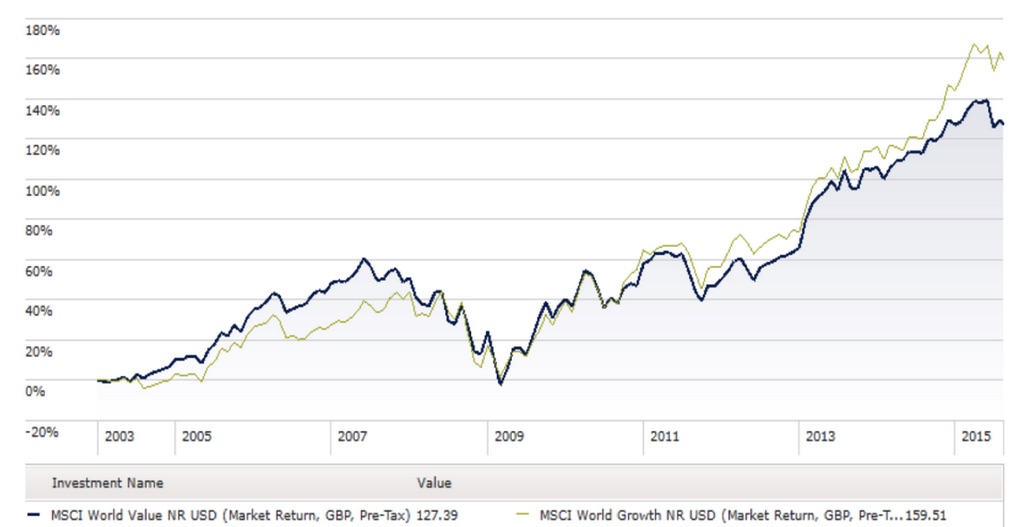 Which market is likely to outperform going forward?

Momentum is against all markets at the moment and the FTSE is selling off more than the S&P. Our international index is being pulled down by its links to emerging markets where growth is slowing and demand for London-listed commodities is falling. But FTSE investors should try to take heart from the fact that style and sectors go through cycles. The freefalling FTSE is getting cheaper every day meaning that when a bounce-back comes it could well be sharper than the S&P.