Spaced based solar power stations of the future

As James Burgess of oilprice.com points out, this idea has been about for decades and serious research began back in the 1970s.

Pacific Gas & Electric Co together with Solaren Corp have been given approval by the State of California to start on just such a project. This will be a 1 kilometre wide free floating Mylar mirror, which will focus the sun’s rays onto a smaller mirror aimed at solar panels. They hope to have it in place by 2016.

The Japanese also hope to have their version of a space based solar energy collector by 2030 and the European space company EADS Astrium hopes that by 2020 it will have developed the infra red lasers capable of transmitting the energy from the space stations down to the surface of the earth.

James Burgess says that there are a lot of advantages to this type of procedure:

The structures though would need to be large and expensive but after the initial set up costs would provide clean energy. 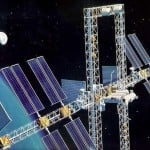 “A new 248 page report from the International Academy of Astronautics,” writes James Burgess “which was obtained by Reuters, represents the most significant assessment of the viability of the concept yet undertaken. It is expected to conclude that it is technically feasible for large satellites to transmit usable energy to earth using either lasers or microwave transmitters.”

Spaced based high energy beams pointing at the earth. All sounds a bit 007 doesn’t it? Let’s hope there’s no Bond villains out there ready to melt the odd city or two, plunge them out of orbit or destroy them. After all huge ticket items such as these will probably have a very high physical and economic systemic risk attached to them. Unlike other platforms their position and beam aiming will probably have to be micromanaged second by second, possibly via ground based control. A target for terrorists of both the physical and cyber variety. Providing security for them might become the largest cost and headache involved in running such systems.

The end of the whine