Spain ups the ante over Gibraltar

Just because we're told that the EU is the answer to all European squabbles doesn't make it so. Just look at what is happening on the Spain/Gibraltar border. And one point to remember is that the people of Gibraltar do vote in the elections for UK MEPs as part of the South West region.

Spain, the country with huge economic and internal political problems, has launched a war of words and actions against Gibraltar as it reacts to the laying of an artificial reef by Gibraltar, which Spanish fishermen say will harm their interests. The Gibraltar stance is that Spanish overfishing has led to serious stock depletion that has to be addressed.

But instead of talking the Spanish authorities charged in like a bull in a china shop with actions that effectively shut down the Spanish/Gibraltar border and also threats to impose a tax on those passing through customs as well as shutting down Spanish airspace to aircraft travelling to and from Gibraltar. They have also said that their auditors will have a very good look at Gibraltarians with financial interests in Spain.

Apart from catering to some sort of nationalistic feelings that might distract people from Spanish economic woes it will probably cause more damage than good to Spain's economy.

The British government says that it stands foursquare behind the people of Gibraltar and that all these issues will be dealt with by political means as EU partners, not through belligerence as displayed by Madrid. But you have to wonder how ready the EU would be to get involved and if it did which side it would tend to favour. One wonders also as to what the UK is being told behind closed doors in Brussels.

Judging by the various comments across the British press most people in the UK are reacting quite angrily against Spain and their views are reflected in the main by UKIP's response: 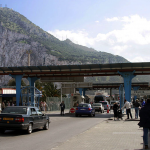 Following the latest escalation by the Spanish Government over Gibraltar with the Spanish Foreign Minister threatening a range of actions including blocking of the peninsular’s airspace, William Dartmouth, UKIP Euro MP for Gibraltar has said,

“It is time that the Government pulled its finger out and stopped mouthing diplomatic niceties to Madrid. It is coming obvious that the Spanish Prime Minister, caught up in a corruption scandal and with a tanking economy with over 50% of their youth out of work needs a distraction, and their futile claims over Gibraltar seem to fit his bill.

“To see this sort of behaviour from a so called ally is sad in the extreme, it is more suited to Argentina than a mature European democracy. “

However, repeated maritime incursions into sovereign Gibraltarian waters, blocking the border, and now a threat to airspace and singling out Gibraltarian citizens Â for enhanced audits show that we are not dealing with an entirely rational Government in Madrid.Â

What Mr Rahoy and his Government must remember is that the people of Gibraltar withstood the behavior of Franco, as they have every attempt to intimidate them over the past three hundred years. They are not going to kowtow now.”

For once the British Government must show some backbone to support the people of Gibraltar. By sending a frigate to Gib, the message will ring out loud and clear, Gibraltar is British”.

Amount of equity withdrawn by remortgaging in month of November tops £0.5bn for first time since May