Tuition fees of up to Â£9,000 are a daunting prospect for any student embarking on higher education, but new research from the UK’s leading flat and house share website SpareRoom.co.uk – based on more than 300,000 rental properties – can reveal the university towns and cities with the most affordable private-sector room rents, with the price of bills included, for students looking to make savings while studying.

Students at Queen’s University in Belfast are best off when it comes to affordable living, enjoying average weekly rents of just Â£67 per week or Â£290 per month, leaving more in the kitty for the student union bar. The stability of the rental market in Northern Ireland’s capital city is also worth noting, as Belfast saw no change in its average rental charges between 2010 and 2012. Looking at accommodation costs alone, it is more than Â£13,000 cheaper to study a three-year degree course at Queen’s Belfast than at any London university.

Following hot on Belfast’s heels is the Complete University Guide’s number seven ranked university, St Andrews, where rooms are an average Â£77 per week, or Â£334 per month. Room rents in St Andrews have actually fallen by 2.5% since 2010, giving students the opportunity to follow in the footsteps of Prince William and Kate Middleton, without paying a royal fortune. Elsewhere in Scotland, Glasgow University provides a big-city alternative to London for a cheaper Â£86 per week rent (Â£373 per month), whilst Edinburgh University is a more expensive Â£94 per week (Â£407 per month).

For sub-Â£80 per week accommodation, students should look at universities in the North, with double rooms including bills in Leicester, Liverpool and Loughborough all Â£78 per week, and Nottingham and Sheffield Â£79 per week.

For particularly studious school leavers, Durham – ranked at number five in the CUG league table, typically viewed as a good alternative to Oxbridge and also boasting the traditional collegiate system – is the most affordable university town in the top five, with average weekly rents of Â£79 per week, a 7% reduction since 2011. By comparison, Oxford and Cambridge will set students who don’t live in colleges back Â£103 and Â£107 per week respectively.

If rents in London continue to rise by 8% a year, as they did between 2011 and 2012, students starting university this year could end up spending Â£25,491 on rent and bills over the duration of a three-year course, while students in Cambridge, who pay some of the highest weekly rents outside London and Surrey, will pay Â£17,348 if rents go up by 3.88% a year over three years. 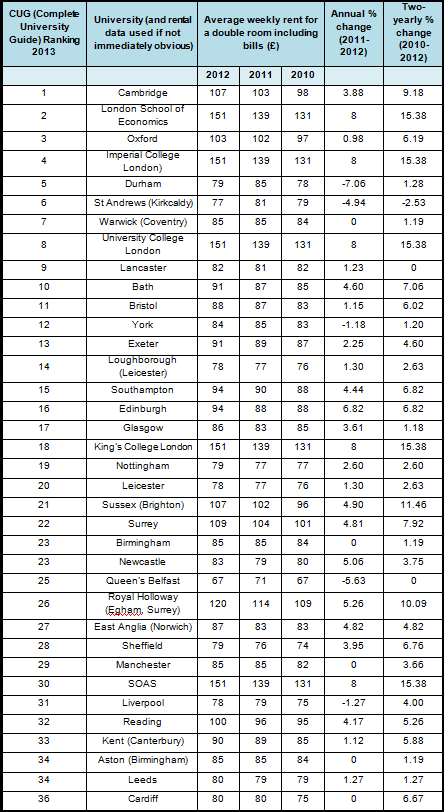 Matt Hutchinson, director of SpareRoom.co.uk, said: “As tuition fees rise students are becoming understandably more cautious about the price of university. Whilst many young people now select their university based on the cost of the course, it is also worthwhile looking at the price of accommodation too, particularly as private sector rents are likely to rise over the next three years.

“Our research shows that studying at Oxbridge or any of the London universities is a potentially huge financial investment. Add to accommodation the costs of public transport in the capital and suddenly your student debt doesn’t look like it’ll stretch that far.

“To save money on accommodation, consider lodging which is generally cheaper and less responsibility, as your landlord will sort out utility bills and this will be included in your monthly rent. Renting a room in a larger shared house might mean long waits to use the bathroom and bigger piles of washing up in the sink, but can be significantly less expensive than sharing in smaller properties.

“Although universities in the South of the UK rank higher in the league tables – there are seven in the top 10 – students looking to make savings on their education should give top-performing universities such as Leicester, Liverpool and Loughborough serious consideration as value-for-money places to live.” 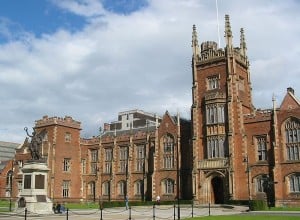 By Man vyi (Own work (own photo)) [Public domain], via Wikimedia Commons

From the Mouths of Babes: How Stunning Sales Strategies Start in Grade School