Spitfire Audio's promised summer blockbuster 'eDNA Earth' has been surrounded by mystery, but is it a case of hype before substance and what exactly is it?

What is eDNA Earth?

Well, since Spitfire began their mission to collate the finest recorded orchestral (and other) samples in history they have managed to accumulate a massive back catalogue of raw samples and those samples have now been put through numerous analogue and digital effects in order to produce a unique new sample library.

This is not an altogether new undertaking by Spitfire seeing as the breathtaking Stephenson's Steam Band patches in the Albion range were constructed in a similar fashion and on face value eDNA only seems like an extension of this process. But this is less than half the story of what Spitfire have put together here.

A Stephenson's Steam Band on steroids offering would be exciting enough, but the real magic is the technical side. The new GUI that Spitfire has designed is so beautiful it should win an award in it's own right.

On their website they claim that they have not reinvented the wheel with eDNA, but after using the new interface in Kontakt I beg to differ.

The level of manipulation you get EQing and adding effects to the samples is flabbergasting. Again not a new concept but the design is beautiful and so user-friendly you can just jump straight in and start crafting new variations of the samples which can be combined.

Out of all of my reviews of Spitfire Audio products this is the single most difficult (hence me keeping it rather short) because you really need to get hands on with it to appreciate and understand how ground breaking it is and, as usual, I recommend you go to the Spitfire Audio website to read the full spec lowdown for what is on offer. 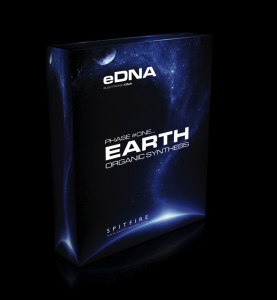 Flicking between the different cartridges it will take you a good couple of days to work your way through the entire sample library and each one will blow your mind.

At times I just sat back in awe at the incredible amount of work that went into the sound design of the Apocalypz, Analoganaut (my personal fav with some beautiful work by Christian Henson), Disphoria, Discoman, Moviedrome and Soundswamp cartridges.

The Factory cartridges contain the expansive 1,900 plus instruments created (…….just think on that for a moment) and you can really get your teeth into them with the effects options inside the GUI.

And the Gate Sequencer and Pan Oscillator are superbly imaginative in allowing you to create sweeping textural sound-scapes.

There are times when you will feel like you are listening to sounds never heard before and that is basically because you are, seeing as these samples are to the larger part taken from Spitfire's huge sample pool that were originally recorded at the highest level of quality available today.

As soon as I opened up eDNA I became very excited and wanted to start composing straight away, so when I heard the Analogonaut I decided to immediately revisit a piece of music I compsed previously ('Tangerines') whilst demoing the 2013 Christmas Labs release.

There are no automated insert effects or volume controls added to the piece of music I have entitled "The Victorian Robots" with all effects added within the GUI.

eDNA Earth is an inspirational addition to the Spitfire Audio plethora of sample libraries and picks up from where the Stephenson Steam Band left off then takes the concept to a whole new level but I keep coming back to the GUI because that is bordering on the revolutionary for sound manipulation outside of external subtractive synthesis.

Ranging from the sublime to the ridiculous, eDNA presents you, the composer, with so many options in new sounds that it can be a bit overwhelming. But if you are looking for unique sounds that will add distinction to your soundtracks or a new and fresh angle to tackle music production then look no further.

The price is very reasonable to say the least at just £149.

Once again, 10/10 goes to yet another product from Spitfire Audio, who have become the unbeatable, undisputed heavyweight champions of the sampling world.