UK companies have reported another upbeat set of results, according to the latest Profit Watch UK from The Share Centre, which analysed annual results published between October and December 2015 (companies with year ends up to the end of September).

Modest revenue growth was augmented by rising profit margins, indicating that companies have grown volumes and managed costs very effectively in a time when ultra-low inflation makes it difficult to raise prices. Good results came from large and mid-cap companies alike, once you look below the surface, and the solid performance came from a wide range of sectors. 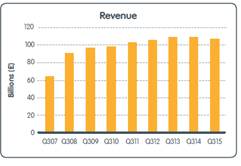 Overall, revenues grew 0.4% on a like-for-like basis to £108.3bn, but this modest increase belies encouraging results from many sectors. Indeed, the number of sectors with growing revenues outnumbered those with falling revenues two to one, indicating that revenue growth is broadly based. Companies exposed to the housing market and leisure industries saw the fastest growth, with consumers splashing out on holidays and new homes. Tui Travel, Easyjet and Bellway Homes were all among the top performers, although recent profit warnings from travel and leisure companies suggest the sector's performance is unlikely to be universally positive this year. Companies like Compass and Wolseley, which have large operations in the US also did well, benefitting from the strong US economy and rising dollar.  A sharp fall in revenues for Imperial Tobacco and AB Foods, mainly due to weak exchange rates in their principal territories and pricing pressures for their products, overshadowed the good growth from many other companies reporting. 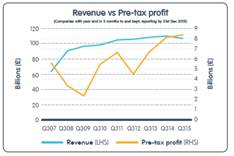 Collective pre-tax profits were held back by asset write-downs at a number of top 100 companies, rising just 1.6% like-for-like. They were 4.4% lower for the top 100, again demonstrating how they continue to lag behind the mid-caps, whose profits soared 26.0%. Pre-tax profits grew for ten sectors and contracted for five, an excellent result.

If we consider the results of the whole 350 reported over the last year, the UK's giant oil and gas producers have seen profits plunge on falling oil prices, knocking £26bn off UK plc profits. Moreover, supermarkets have suffered a dramatic margin squeeze as the food retail price war has taken its toll, hitting profits by over £10bn. Other sectors to suffer include mining and pharmaceuticals. Sterling's strength against many currencies has also reduced the translated value of overseas results in many parts of the world. With more than 100 profit warnings reported in the last quarter of 2015 by EY, these headwinds will continue to impact company results.

"Our analysis shows there is plenty of choice for investors to find companies enjoying rapid growth. Slumping oil and commodity prices, emerging market turmoil, and the possible end of the era of ultra-low interest rates may be hitting a small number of sectors like oil and mining hard, but they are easy to avoid. With a handful of very large and very high profile companies suffering simultaneous pressure on their profits, it's easy to overlook excellent growth elsewhere in the economy. The UK stock market is more concentrated in these commodity sectors than any other developed market in the world, so stock-picking is vital if investors want a more balanced portfolio, and if they want to invest in companies making the most of the rapid growth in the UK economy. There are winners and losers in every sector, even the ones showing overall growth, so it's important to be vigilant.

"The latest set of results from UK plc shows there is lots to be cheerful about. While the impact of global headwinds will continue to dominate the headlines, companies exposed to the UK consumer are broadly painting a different picture altogether for investors."