Star Export Performers Include US, Mexico And India

Scotch Whisky exports remained strong in 2013, and Single Malt continued to increase in popularity, according to figures published today (11 April) by the Scotch Whisky Association (SWA).

In volume terms, exports increased 3% to the equivalent of 1.3bn bottles in 2013 from 1.2bn bottles the previous year.

Demand for Single Malt continues to grow as consumers try the wide range of Scotch available. Single Malt exports were up 5% in 2013 to reach a record £820m, nearly a fifth of exports by value.

Overall, Scotch Whisky represents around 85% of Scottish food and drink exports and nearly a quarter of the British total. The industry's exports are worth £135 a second to the UK trade balance.

This performance represents consolidation of a strong export effort. It also reflects varied underlying patterns in the 200 markets the industry exports to.

There were a number of strong performers across the globe.

For example, exports of Scotch to the USA grew 8% on 2012 to a record £819 million. This represents nearly £1 in every £5 of exports and is by far the largest market for Scotch by value. The efforts to boost trade with the US through the Transatlantic Trade and Investment Partnership (TTIP) could help this even further.

France remains the largest volume market for Scotch. It was up 16% as it returned to normal following a tax hike on spirits at the start of 2012.

In India, the year was the best one yet. It is the fourth biggest market by volume and fourteenth by value, up 12% to £69m. The SWA hopes the EU-India Free Trade Agreement negotiations will re-start following this year's Indian elections, leading to a reduction of the onerous 150% import tariff.

Exports to Brazil and Mexico grew by around 20% – to £99m in Brazil and £110m in Mexico, where Scotch Whisky is now one of the UK's fastest growing exports.

In Poland, exports grew 38% to £60m. Scotch exports to that market are around 10 times as big as when Poland joined the European Union in 2004.

Some parts of Asia did not perform as well as in previous years, principally because of slower economic growth and government austerity measures. Direct exports to Taiwan, South Korea and Japan all fell in value by between 13% and 15%. China fell out of the top 20 markets, with direct exports declining nearly 30% to £51m. 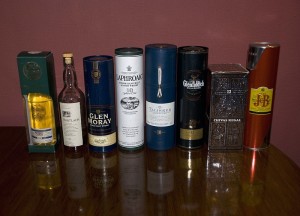 "Scotch Whisky exports remain strong and the industry's impressive performance makes a major contribution to the UK's trade performance. The unprecedented investment programmes in Scotch Whisky by producers show that in the long term they are confident that demand will continue to grow.

"However, in the short run, there are some economic headwinds. Formal and informal barriers to trade remain. We should remember that the industry's success does not come automatically but is based on hard work, investment and careful stewardship.

"As a former ambassador, I know that the industry also depends on strong political support from government, for example to influence European Union negotiations on our behalf or to press other countries to allow better access to their markets. Both the UK and Scottish Governments have played an important role in this so far. Whatever the outcome of the Scottish referendum, as an industry exporting to around 200 markets we will continue to need the backing of an effective diplomatic network with the necessary global reach, commercial expertise, and capacity to influence."

Barclays’ LIBOR submissions graph just about says it all

Investors looking beyond their own home to boost exposure to property

More of the same as traders remain bearish