Imagine as a citizen of the UK, you are walking home through a housing estate, after buying sweets and are confronted by someone demanding to know where you are going and why you are there. 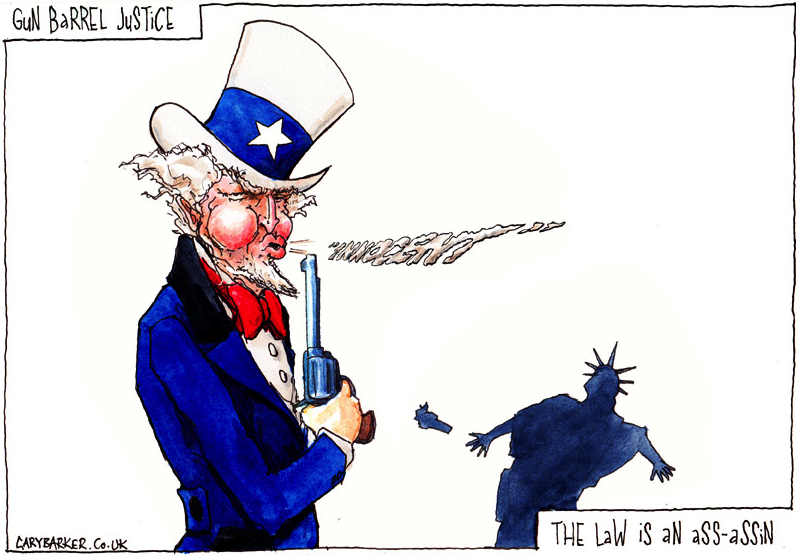 Many people would of course offer up some kind of favourable response, if only to prove themselves more reasonable than the rude member of the local neighbourhood watch busy body, sticking his nose into your business.

But what if your reply didn’t appease your interrogator and they then drew a pistol and threatened you with it? You would of course feel not only very scared, but also that you are the victim, as none of this was of your own making and the only thing you are armed with is the sweets you have just bought. You would of course do the only sensible thing to do – run!

But the man runs after you and then the unimaginable happens – he fires his pistol and you are killed. Any reasonable minded individual would see only one aggressor and only one guilty party: the man with the gun.

And yet on 26th February 2012 this is what happened to teenager Trayvon Martin in Florida. But because that state has the ‘Stand Your Ground Law’, his killer was released without charge after questioning on the night of the killing. In effect the Stand Your Ground Law means someone armed with a gun need not cede any ground to anyone they see as a threat. This case proves that this is nothing more than a ‘shoot first’ get out of jail free card and the brainchild of the massively powerful gun lobby organization the NRA (National Rifle Association). Even if you disagree with my description of the events that resulted in the killing of Trayvon Martin, the best possible case scenario for the killer is that Trayvon punched him several times, after being pursued by the killer who was waving his gun around. On 13th July 2013, George Zimmerman was found not guilty of the second-degree murder and manslaughter of Trayvon Martin.

The USA has allowed its legislature to be hijacked by what to all intents and purposes is a union of powerful businessmen, corporations and individuals who worship only the gun; either because of the profits it makes them, or for the feelings of personal empowerment the gun gives them. The NRA has the US government by (in their vernacular) the cojones. Over 70% of Americans are in favour of gun control legislation and yet the politicians are either in the pay of, or too scared to act against the wishes of, the NRA; even with this clear mandate from the people to act on gun control.

The tactics of the membership don’t restrict themselves to bribing politicians and some take much more direct action, such as attempting to smear the twenty dead children and six staff members viciously murdered by a killer armed with a semi-automatic rifle in Sandy Hook elementary school on 14th December, 2012, by suggesting the tragedy didn’t actually happen and the aggrieved parents were actors in a government plot to bring in gun control.

On 17th April 2013, the Manchin-Toomey Background Checks Bill (see: ibtimes.com/gun-control-debate-why-manchin-toomey-background-checks-will-never-pass-senate-1245775#), which would have introduced some forms of gun control/checks failed to pass the US Senate by six votes, with 48 democrats and 4 Republicans voting for the bill, and 5 democrats and 41 Republicans voting against. The NRA released a statement critiquing the bill, stating that "expanding background checks, at gun shows or elsewhere, will not reduce violent crime or keep our kids safe in their schools." The NRA has constantly pushed the lowest common denominator paranoia buttons, rife in the psyche of many Americans, knowing exactly how their anti-Big Government trying to take away their misguided and out-moded 2nd Amendment ‘Right to Bear Arms’ message would play out and how their cynical machinations would make them both the most powerful and most dangerous interest group in the USA. The USA is now a country I can hardly equate with a developed civilised country and some of the laws it has created over the last ten years are more akin to a rogue state than to that of the self-styled land of the free.

I have one message for the corrupt and/or cowardly politicians in the US who voted against gun control: no one should bow to the will of anything or anyone who puts their love of guns before the lives of children and any country that allows this to happen should hang its head in shame.

Someone wants help from the lender of last resort