Although Friday's ecostats from the Eurozone were fairly upbeat, the Pound still managed to achieve a two-month high against the Euro on speculation surrounding the European Central Bank's (ECB) plans for additional easing. Sterling also advanced on rivals like the Australian and New Zealand Dollars after a surprise rate cut from the People's Bank of China (PBoC) sent commodity-driven currencies lower. Today's BBA Loans for House Purchase data and the Confederation of British Industry's Trends Total Orders/Selling Prices figures could prompt some Pound movement, but investors with an interest in the British asset will also be looking ahead to tomorrow's third quarter growth data for the UK.

After the People's Bank of China (PBoC) delivered an unexpected interest rate cut, the US Dollar advanced on hopes the action would give the Federal Open Market Committee (FOMC) more scope to increase interest rates. Friday's US data, the Markit Manufacturing PMI for October, also printed more strongly-than-forecast, revealing an increase from 53.1 to 54.0 rather than the figure of 52.9 expected by economists. With the FOMC rate decision looming, the US Dollar is liable to come under some pressure over the next few days. Today's US New Home Sales report is expected to show a -0.4% decline month-on-month in September but a surprisingly positive result may prove 'Greenback' supportive.

Last week's decidedly dovish policy statement from the European Central Bank (ECB) sent the Euro reeling and the common currency failed to recoup losses on Friday in spite of the Eurozone's Services PMI printing above projected levels. While this morning's German IFO Business Climate/Current Assessment gauges could lend the Euro a little support if they show improvement, concerns that the ECB is intending to adjust policy before the close of the year are liable to limit any Euro gains. 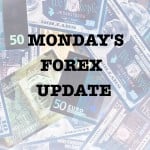 As the unexpected rate cut from the People's Bank of China (PBoC) upped the odds of the Fed increasing interest rates and indicated that policymakers are panicking about the extent of the slowdown in the world's second largest economy, commodity-driven and higher-risk currencies like the Australian Dollar were pressured lower. Australia isn't set to publish any influential data until Wednesday, when the nation's third quarter consumer price index is scheduled for release.

The PBoC action also sent the New Zealand Dollar lower before the weekend. This week could prove decisive for the 'Kiwi' with New Zealand due to release its latest trade data and the Reserve Bank of New Zealand's (RBNZ) in line to deliver its interest rate announcement. Dovish commentary from the RBNZ and any hints that borrowing costs could be cut in the near future would be NZD negative.

While developments in China weighed on the Canadian Dollar towards the close of last week, the 'Loonie' also came under pressure as Canada's Consumer Price Index slowed from 1.3% to 1.0% in September. A slightly stronger annual figure of 1.1% had been forecast. In terms of Canadian news, the reports to focus on this week include the Industrial Product Price and Raw Materials Price indexes and GDP numbers for August. Canada's economy is forecast to have expanded by just 0.1% on the month in August but to have recorded a slightly stronger rate of annual growth of 0.9%.

With risk sentiment improving after Friday's surprising action from the PBoC, the Rand was able to move away from a three-week low against the US Dollar. South Africa's third quarter unemployment data, the nation's Producer Price Index and trade balance figures could all inspire Rand shifts in the days ahead.