The latest Market/CPI UK Manufacturing PMI shows that the index dropped below the neutral 50 point in February into negative territory at 47.9 so having a marked adverse effect on GBP on the foreign exchange markets.

Markit Economics said that the UK manufacturing sector 'lost considerable momentum' in February with both new orders and employment showing net reductions over the month, with new orders falling at an 'accelerated pace'.

"The British pound is under momentous selling pressure across the board this morning after Britain’s latest manufacturing survey unexpectedly turned negative, bolstering speculation the Bank of England will kick-off a new round of QE in its meeting next week.

February’s UK manufacturing PMI slumped to 47.9, below the growth/contraction level of 50 and much worse than forecasts of a gain from 50.5 to 51.0. January’s original 50.8 print was revised down to 50.5.

The data is a major setback for sterling and the size of the manufacturing decline indicates that there is still a chance the British economy may suffer an unprecedented triple-dip recession.

The data also adds to growing concerns that not only could the BoE re-start monetary printing in March, the central bank’s new flexible inflation strategy puts it in a position to launch a prolonged period of asset purchases, similar to what the US have done and what the Bank of Japan is planning to do.

Cable (GBP/USD) crashed to new 2 Â½ -year lows following today’s news and is in danger of falling apart as investors worry the data may bring about a more aggressive BoE in the coming months." 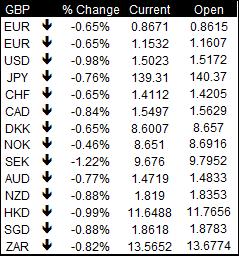 “This is quite a setback after the better data – both from official figures and surveys – of the past couple of months. The weakness of new orders is the main concern, where the problems in the Eurozone continue to have a crippling effect, outstripping any benefit that manufacturers have had from the weaker pound. Respondents reported stronger demand from emerging markets, which reinforces the message that firms need to focus on moving away from traditional markets towards the fast-growing emergers.

“The drop in output raises questions about the strength of GDP in Q1, although the recent strength in the official manufacturing output series may be sufficient to keep the UK’s head above water.

“If we see similar weaknesses in Tuesday’s services survey it will be a real test of how serious the MPC is about its renewed focus on growth. Most of the activity indicators point to an economy which is, at best, flat-lining. Having indicated their readiness to act, it is time for the MPC to deliver.

“It is interesting to see that the strength in manufacturing employment has begun to reverse. While manufacturing is now only a relatively small part of the UK economy, this could be a sign of things to come in the wider economy.”

“A pretty sluggish set of figures, although this weakness was well trailed by the BBA data from earlier in the week, which suggested that the January snow has been disruptive to mortgage activity.

“The wider picture is one where Funding for Lending Scheme (FLS) is providing some support to mortgage activity, both by improving access to mortgage finance and reducing its cost. With the interest rates charged on new business continuing to fall, it is surprising that remortgaging activity has continued to slip back – homeowners appear to be missing out on the cheaper new deals that are out there.

“We expect to see housing market activity gradually strengthen through the year as the full impact of FLS continues to feed through. Prices seem to be firming too, although we probably won’t see the full impact on prices until next year.

“On the unsecured side we continue to see an encouraging pickup in lending, which goes side-by-side with the recent consumer recovery.”

US Credit Rating Downgraded to Same Level as Brazil?