Americana duo Balsamo Deighton announce the release of their debut album ‘Unfolding’. Steve Balsamo and Rosalie Deighton – both respected vocalists, musicians and songwriters in their own right – have joined forces to record a collection of ‘grown up songs on the human condition’.

Influenced by a wealth of classic writers and musicians – from Gram Parsons, Crowded House and Steve Earle to Tom Petty, Ryan Adams, Robert Plant and Alison Krauss – Balsamo Deighton's songs pretty much nod and wink to them all. The duo are two close friends, simply making music that they love. “I love Rosalie’s ethereal voice and knew that although we are very different singers something magical was happening” says Steve. They instinctively knew what harmonies to sing, “Singing with Steve takes me to a happy place where even the best wine in the world can’t take me!” jokes Rosalie.

After meeting 10 years ago at Martin Terefe's London recording studio – where they were working on their respective debut solo albums – they bonded over a love of 70s singer/songwriters, country music and cake and vowed to record together as they felt their voices blend together and give what Emmylou Harris calls ‘the rub’ – two harmonies melting into one.

Several times around the world in various musical guises, their paths crossed again when Rosalie – who grew up in the successful folk band The Deighton Family and is considered one of Britain’s finest female vocalists – supported Steve's highly regarded band The Storys. Having returned from touring with the likes of Elton John, Santana, Celine Dion and Joe Cocker, The Storys asked Rosalie to collaborate with them.

When The Storys decided to call it a day, Steve and Rosalie took it as a sign that the time was right to make some music together. They called on friend and songwriter Julian Wilson of Grand Drive, and slowly and quietly kicked some ideas around at his South London studio. These initial sessions were inspiring, fun and very rewarding and all three realised that indeed they had found ‘the rub’. Recording began in earnest with producer and songwriter John Reynolds (Sinead O'Connor, The Indigo Girls and U2), tracking the first song ideas at his North London studio. 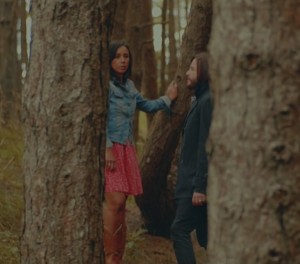 The PledgeMusic fan-funded album boasts an eclectic mix of stories inspired by their lives. Title track ‘Unfolding’ is about receiving the dreaded letter from the army as Steve explains, “The Storys were once contacted by a father who had lost his son in Afghanistan. They were both fans of the band and they sent a representative of his squadron to collect one of our songs the day before the funeral. It was incredibly moving to be a part of his story, and Unfolding is our reaction to it.” ‘The Dream Song’, an upbeat hopeful anthem, is inspired by a conversation between Steve and the late Jon Lord’s widow in which they both talked about meeting Jon in dreams and how, as in life, he reassured them to keep the dream alive.

Love is represented, of course: while atmospheric love song ‘Long Way Round’ was written after Rosalie discovered an affair, country style ballad ‘Run Back To Your Life’ tells a tale of falling in love with the right person at the wrong time. Meanwhile, ‘The Ghost Of Me And You’ is about two lovers trapped in a relationship that’s dead and, if you listen closely, the voice of a ghost (recorded by Steve at a paranormal investigation) can be heard whispering I kissed her.

Earlier this year the duo performed at Country 2 Country 2015 at the O2, cementing their place in the burgeoning Americana/Alt-Country scene in the UK, where the pair recorded an acoustic session on the Emirates Airline cable car at the event for The Telegraph. Balsamo Deighton are also looking forward to heading out on the road to support ‘Unfolding’ next year.

Hope for Haiti concert is a resounding success