Steve Mason has returned with Â punchy new track 'Fight Them Back' that sets the tone for his new album 'Monkey Minds In The Devil's Time'.

I could begin this review with the usual generic "Steve Mason former lead singer with the Beta Band" dirge but in the case of Steve Mason it does not feel right to begin an article as such but rather end it in that manner.

The reason being is Steve Mason's last album 'Boys Outside' contained so many gems that the Queen if she could (or dared) would confiscate them and have them sent to the tower of London to join the rest of the crown jewels and Steve Mason's fans are not waiting for another Beta Band album (Okay some of them might be) but another Steve Mason album.

So, onto the song….it is superb (video below)!

Fight Them back is an unashamed rallying call for people to stand up against the system but it also has a charming, almost utilitarian simplicity, which is a very refreshing direct approach and this all bodes very well forÂ Monkey Minds In The Devil's Time.

At last a type of protest song that doesn't command the listener to mull over being a compliant victim and surrender to the ideology of a peace movement, which has pacified the masses into apathy since the 1960s.

Mason has described his forthcoming album as "a concept album about a human being from the age of 15 yrs old. Fight Them Back is Part of the overall message."

"I suppose its [the single Fight Them Back] trying to make people realise that as a race we are slaves to a very very small amount of people who shape and control everything. And have been doing so for hundreds of years.Â The plans they have for us are beginning to accelerate so we need to wake up and regain the planet earth for real humans who love each other and feel compassion."

There is strong 'lets get downÂ business' feel to the track and speaking of getting down to business here is myÂ usualÂ production breakdown.

Some of the best miked up drums I have ever heard open the song (and boy do they sound good) with the ride coming straight in, gorgeous EQ of the snare giving a depth in the lower mid and a lovely deepÂ resonanceÂ on the kick.

Drums are then met by the bass also played by Mason and straight into the vocals backed with what is an ambiguous reverb guitar that pads the nicely set vocals sung by Mason with an octave second vocal to add weight to the vocal presence which has the tone and ambiance one would expect from the man who gave us All Come Down.

Then there is a very effective yet subtle cinematic refrain which acts as a bridge into the chorus which you will beÂ hummingÂ all day "You get up and fight them back, a fist a boot and a baseball bat".

As I said this is a no nonsense track whereÂ dissatisfactionÂ and righteous anger are the linchpin of the lyrical content.

The song takes a triumphant change in mood at 2 mins 26 secs where a backing vocal is layeredÂ in a heavy reverb allowing it to be set back in the mix whilst holding ground against the strings and change in bass line over which Mason enters an anthemic rallying chant leading into a sample of David Icke talking giving way to war criminal, Tony Blair talking about Libya being a "goldmine of a country".

This is thought provoking stuff for a generation beingÂ spoon-fedÂ soulless music with meaningless lyrics.

Let us hope that the song gets lots of airplay, not only for Steve Mason but for of us who are sick and tired of where music has been going in recent times.

Oh and yes and he was once lead singer in the legendary Beta Band.

I give Fight Them Back a rating of 10/10 and you can download it from iTunes HERE. 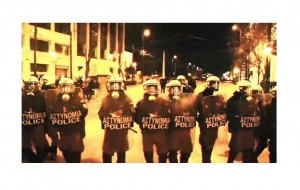