With the recent market volatility, it’s worth looking at how investment companies have performed during market highs and lows. Data from the Association of Investment Companies (AIC) suggests that, in the absence of a crystal ball, it is time in the market that is key to investor returns.

Whilst AIC data illustrates that performance is clearly enhanced when the investment is made at or near the bottom of the market, given the difficulties of timing the market it’s more important to be invested in the market.

But if you do get your timing right….

Of course for the lucky few who have actually benefited from market timing, the returns are obviously much greater still. A Â£100 investment in the average investment company on 28 February 2003, just before the invasion of Iraq on 19 March 2003, when markets were at one of their most recent low points, has more than tripled to Â£347 over 10 years and three months to 31 May 2013. The UK Growth investment company sector has performed even better over the same time frame, returning Â£400.

Similarly, those investing post credit crunch and during the recession at the end of February 2009 just before the FTSE 100 hit a six year low, would have doubled their money in just four years and three months. A Â£100 investment in the average investment company from 28 February 2009 to 31 May 2013 has grown to Â£209, and has performed better still in the UK Growth sector, which has returned Â£224.

Annabel Brodie-Smith, Communications Director, Association of Investment Companies (AIC) said: “Whilst market timing can have a significant impact on returns, given how notoriously difficult this can be, the performance figures illustrate that time in the market is key to stock market returns.

“Regular investing can be a useful way of reducing your risk profile, because investors buy fewer shares when prices are high, and more when prices are low. But because lump sum investments have more money working from the outset for a longer period of time, it is not surprising to see lump sum investing outperforming strongly over the long-term.” 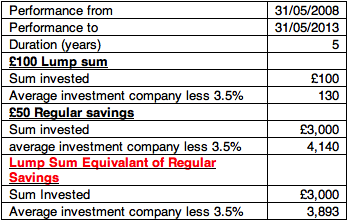