Following the quieter holiday season the Pound has remained somewhat softened, dented by the revelation that the UK’s manufacturing sector had grown by less than expected in December. As the winter storms and flooding are already speculated to have shaved 0.25% off the nation’s GDP this news saw traders move away from the currency in favour of rivals. With the latest mortgage approvals figures suggesting that the domestic housing market remains in a bubble there has been limited incentive to buy into Sterling. However, as growth in the construction industry was found to have bettered estimates on Tuesday the Pound has been shored up against some of the majors.

As European Central Bank (ECB) policymakers have sustained a more dovish tone with regards to future monetary policy decisions the Euro has started 2016 on a weaker footing. Eurozone manufacturing production was unexpectedly strong on Monday, with Greece returning to a positive state of expansion to mark the first time since April 2014 that the entire currency union has posted growth on the month. However, as both German and Eurozone inflation failed to rise as anticipated the single currency soon began to shed value once again. With inflationary pressure proving determinedly weak the chances of imminent further ECB easing have continued to edge higher.

Confidence in the US Dollar was dented as the latest ISM Manufacturing Survey and domestic construction spending figures demonstrated contraction, leading to fears that the world’s largest economy is experiencing a persistent slowdown. As the Federal Open Market Committee (FOMC) opted to raise interest rates in December from multi-year lows there have been some suggestions that the Fed has acted prematurely. With the rate of future hikes far from clear, and the possibility that weak economic data could prompt a reversal in course, the ‘Greenback’ is likely to remain volatile in the coming week. 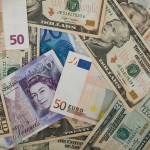 Monday saw a sharp spike in investor risk aversion after Chinese stock markets were closed early in response to a 7% drop in share values and the latest Chinese manufacturing data proved less than encouraging. Base metal values and commodity-correlated currencies slumped markedly in response to the news, driving the ‘Aussie’ down across the board. However, after the People’s Bank of China (PBOC) intervened in the markets on Tuesday to prevent a second day of severe losses the antipodean currency has been regaining much of its lost ground.

Ahead of the latest GlobalDairyTrade auction the ‘Kiwi’ has been trending lower across the board, failing to derive support from the PBOC’s market invention and decreased global risk aversion. As the strengthening US Dollar is expected to weigh heavily on the South Pacific currency in the coming months the prospect of another Reserve Bank of New Zealand (RBNZ) interest rate cut has been diminishing the appeal of the ‘Kiwi’. Traders remain largely cautious of the fragile state of the dairy price recovery, although a solid auction result could well boost demand for the New Zealand Dollar.

Brent crude initially defied the general commodity downtrend as rising geopolitical tensions between Saudi Arabia and Iran sparked suggestions of a decrease in the global oil supply. Nevertheless, the prospect of reduced US and Chinese demand soon returned crude to a downtrend as the ‘Loonie’ struggled to make a less bearish start to the year. After Canadian manufacturing also contracted by more than expected the Canadian Dollar weakened further against the majors, although it has since managed to claw back gains due to improved market stability.

Rightmove: without more properties for sale prices might go up 8% in 2014