The Dow Jones Transportation Average is still very close to its all-time high, and so are countless component companies. The airlines, in particular, have been very strong in a classic bull market breakout performance. Many of these stocks have roughly doubled over the last 12 months.

Commensurate with continued strength in the Russell 2000 index of small-cap stocks and year-to-date outperformance of the NASDAQ Composite, this is still a very positive environment for equities. The NASDAQ Biotechnology Index continues to soar.

While strength in transportation stocks is a leading indicator for the U.S. economy, so is price strength in small-caps. Smaller companies are more exposed to the domestic economy, and while it’s too early for many of these companies to report fourth-quarter earnings, the Russell 2000 has outperformed the Dow Jones industrials and the S&P 500 over the last five years, confirming the primary upward trend.

Instead of an actual correction in stocks, we’ve only experienced price consolidation; the latest being in blue chips since December.

This is very much a market in need of a pronounced price correction, if only to realign expectations with current earnings outlooks. Fourth-quarter numbers, so far, are mostly showing limited outperformance, and those companies that have beat consensus are still, for the most part, just confirming existing guidance, not raising it. If this is a secular bull market, it’s time for a break.

A meaningful price correction in stocks would be a very healthy development for the longer-term trend. Corporations are in excellent financial shape, and the short-term cost of money is cheap and certain. 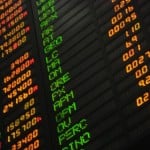 Stock Market Board by Katrina. Tuliao

In order for this market to turn in a meaningful way, a major catalyst must occur to change investor sentiment. There is mostly certainty from the Federal Reserve this year regarding short-term interest rates and quantitative easing (QE) tapering. The absence of the recent budget deal could have been a major catalyst, but policymakers chose to avoid another showdown.

The sovereign debt crisis in Europe is not over, but it is being dealt with and for the time being, capital markets aren’t worried. There’s always the potential for a major derivative trend going bad or a negative geopolitical event cropping up, but these can’t be predicted.

What’s left in terms of a market-changing catalyst is the performance of corporations themselves and the valuation the market is willing to attribute to earnings. Stocks were overbought in the fourth quarter of 2013, and the trading action is looking tired.

In this market, there is not a lot of new action to take. Countless stocks including those with the best prospects for growth this year are fully—if not expensively—valued.

The best action to take now is to reevaluate your portfolio risk and make a wish list of those stocks you’d like to own if they were more attractively priced. (See “Stock Market Focus to Shift in 2014.”)

Current fundamentals still favor equities, and the market will bid outperformance, but I wouldn’t chase anything in this market. Any extra cash would be worth sitting on in anticipation of a well-deserved stock market correction, so keep that wish list handy.

This article Stock Market: Where the Real Risk Is in 2014… by Mitchell Clark, B. Comm was originally posted at Profit Confidential.