Katharine Hamnett, the pioneer of ethical and environmental clothing, has pledged her support for anti-fracking campaigners, including Caroline Lucas, Green MP for Brighton Pavilion, as they stand trial for involvement in anti-fracking protests at Balcombe last year.

Last summer, Sussex Police arrested 126 people during the anti-fracking protests in Balcombe, which included the five who are appearing in court this week. All of the five deny charges of obstructing the public highway and failing to comply with conditions imposed by a senior police officer.

Fracking is a controversial process where a mixture of water, sand and chemicals are pumped underground, under high pressure, to force gas from rock layers. The Green Party is the only major party fighting to prevent fracking and drilling. 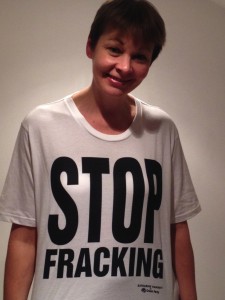 “Climate change is the biggest threat to our future and fracking will only compound the threat. Caroline Lucas is one of the few politicians to fully grasp the threat from irreversible climate change and take a real stand. I am behind her and the other anti-fracking activists every step of the way.”

Lucas decided to join the peaceful protest at the proposed fracking site in Balcombe to send a clear message to the Government. She said:

“Climate scientists and experts are clear that emissions from nations like the UK need to be reduced much faster than they are at the moment.

“We need a rapid shift to a zero carbon economy, along with policies to keep the vast majority of known fossil fuels in the ground, if we are to avoid catastrophic climate change. The window for action is closing fast.”