Storage Company Thinking Outside the Box with new Video

Take two contortionists, a self storage locker, add some Benny Hill music and what have you got? An entertaining, tongue-in-cheek, shareable video that somehow manages to make storage fun.

That’s exactly what storage company Access Self Storage has done to promote its business and increase brand awareness.

The self storage provider has created a video of two of the UK’s leading contortionists – Pixie le Knot and OohLa Lowri – getting acquainted with one of its storage units.

Access wanted to see just what the two contortionists could do with one of its storage lockers, which turned out to be quite a lot!

The day of filming at Access Self Storage’s Fulham Broadway facility was an eye-opener for all involved, and made for a hilarious video.

The video is part of Access’s ‘Get Into Storage’ campaign, which aims to find the weird and wonderful things that people have either stored or found in self storage lockers. 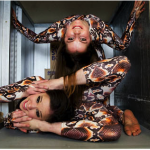 The inclusive nature of the campaign, which encourages people to join in the conversation and share their self storage experiences, has resulted in increased social media engagement with the Access brand.

“So far the campaign has been a great success; the video is funny and shareable, and people are taking notice of the Access brand,” said Kevin Pratt, Marketing Executive at Access Self Storage.

“It shows that, by being creative and coming up with something a little different, brands can reach out to consumers far more effectively.”

But it’s not just on social media that the campaign has had an impact; the unusual and alternative nature of the video has meant that other sections of the media have picked it up as well.

Press images from the video shoot featured in a number of national newspapers, showing just how a powerful a great marketing idea, effectively implemented, can be.

Take a look at how Access Self Storage covered the launch of the ‘Get Into Storage’ campaign itself here:

Schroders reflects on the recent market volatility in China