The performance of Owen Paterson, the increasingly beleaguered Environment Secretary, raises serious questions about the Government's ability to tackle flooding and climate change and defend our environment, Friends of the Earth warned today (Wednesday 8 January 2014).

In the past week alone the Environment Secretary has, says Friends of the Earth:

· Wrongly claimed that "this Government is spending more than any previous government on flood defences";

· Flatly contradicted warnings from the Chief Executive of the Environment Agency, Paul Leinster, that forthcoming 15% budget cuts to his organisation will inevitably “impact” the organisation’s ability to deal with flooding, with 550 staff working on flooding earmarked to be sacked;

· Been criticised by the outgoing President of the NFU for downplaying the climate risk to farmers;

· Suggested ancient forests could be felled by developers. 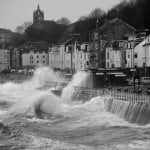 "With Owen Paterson in charge of defending the country from flooding, the Government's credibility is sinking fast.

"The Environment Secretary says the government is spending more on flood defences, when in fact he's presided over a real-terms cut and hundreds of Environment Agency jobs are under threat – his refusal to accept the science of climate change may be blinding him to the human costs of the consequences of this.

“With everyone from the Government's climate envoy to the President of the NFU warning that climate change will increase flooding, the storm-damaged Environment Secretary has serious questions to answer.”

Snow falls, the UK panics and shuts down. Why?