Central Asia Metals plc ("CAML" or the "Company") is pleased to announce that it has entered into an agreement with Copper Bay Ltd ("Copper Bay"), whereby CAML will acquire a 50 per cent equity interest on a fully diluted basis in Copper Bay for a cash consideration of £2.0 million (c.US$3.2 million) (the "Investment").

Copper Bay was established in 2010 and its principal asset is the 100 per cent owned Chañaral Bay Copper Project, located in the Atacama region of Chile (the "Project").

In early 2013 a Competent Person's Report ("CPR") was completed on the Project by Wardell Armstrong International Limited ("WAI"). The CPR noted that a comprehensive assessment of the mineral resource was carried out in 2008, which estimated a non-JORC compliant resource at the Project of approximately 116 million tonnes ("Mt") with an average grade of 0.25% copper, equating to approximately 288,000 tonnes of contained copper. 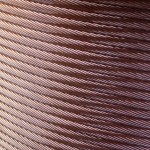 "I am delighted to announce this investment, which follows on from our success at Kounrad. Since CAML's IPO in September 2010, the management team have worked hard to make the Company a successful low cost copper producer. The Kounrad copper project in Kazakhstan is currently producing 10,000 tonnes of copper cathodes annually and generating significant positive cash-flows. This has enabled CAML to develop a robust dividend policy and return material sums to its shareholders which will not be impacted by this particular investment.

"Whilst CAML will continue to grow its current business in Kazakhstan, we feel it is now appropriate to look for opportunities elsewhere which have the potential to diversify our portfolio of assets and create value for our shareholders. The investment in Copper Bay is small but we believe the project may well provide the opportunity for such value creation.

"The investment in Copper Bay is our first outside of Central Asia and provides CAML with an entry into Chile, which is one of the world's largest copper producing countries and which is widely regarded as having an attractive investment jurisdiction and stable economy."

Manufacturers press ahead with further growth in orders – CBI survey

What is a Paralegal and When Should Your Business Use One?